This is a next-generation virtual reality headset sure to take virtual reality to the next level with some impressive image resolution on the VR landscape that will make VR more real than ever before. The launch further pushes the boundaries of what is realizable with VR headsets ahead of the company’s ‘Pimax Frontier’ campaign.

The Reality 12K QLED headset will be released towards the end of 2022 and is priced at $2,399. The company will also be offering very generous discounts to existing Pimax headset owners.

Pimax is a VR equipment manufacturer and its latest headset features a number of technologies such as full-body tracking, eye tracking and refresh rates of up to 200Hz. Pimax Reality 12K QLED is billed as part of the company’s foray into the metaverse and a quest to create true realism in virtual reality experiences.

According to Pimax representatives, the Reality device is aimed at creating self-awareness, naturalness, and freedom. The company says it wants to bring these ideas into virtual reality as well as the metaverse which will enable people across the globe to interact with one another and explore the virtual environments together. Some of these are already realizable with existing VR technology but Pimax is intent on taking it to the next level via its Reality 12K QLED VR headset.

The Reality headset features a technology the company calls Gemini. It blends the freedom of standalone VR headsets with the quality you’d expect in PC VR headsets and runs on two different engines.

Pimax also partnered with Nvidia for the optimization of the graphics quality in its headsets. Its new Reality headset is said to leverage Nvidia’s VRSS, DLSS, DSC as well Cloud XR technologies.

The first engine that the headset runs on is Pimax’s customized PC VR engine while the second one is Qualcomm’s Snapdragon VR engine. This combination is said to considerably improve the graphics performance in the standalone mode while also providing users with extra freedom with minimal costs on the quality.

In its PC VR mode, the Pimax Reality reportedly provides resolutions of up to 12K along with refresh rates that range between 90Hz and 200Hz. The headset also features a 200-degree horizontal field of view (FOV).

There is a step down in the quality performance when you are using the Reality 12K QLED headset in the standalone mode but it is still reasonably good even in this mode so it is not something that end users will whine about. The wireless performance of the Reality headset features resolutions of up to 8K as well as a maximum refresh rate of 120Hz and a 150-degree horizontal field of view (FOV).

For true realism, Pimax is deploying a mini-LED and QLED technology as opposed to an LCD or OLED display technology. Apple is also using this technology in its latest MacBook Pro.

During the unveiling of the Reality headset, Pimax also announced other groundbreaking industry announcements regarding its new virtual reality headset. For instance, its VR headpiece features a whopping 11 cameras for tracking various functionalities including facial expressions, eye movement, hand movement as well as full-body movement. The headset also features Wi-Fi 6E technology that enables users to enjoy quick and lag-free streaming with the virtual reality headset. 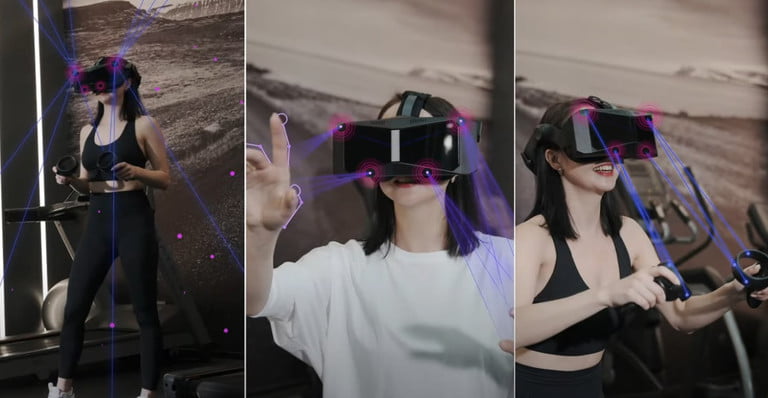 This is a powerful virtual reality headset and running it will require an equally powerful gaming PC. Pimax used the opportunity of the announcement to tease the upcoming release of its mini PC/gaming console. The dedicated console runs only on Pimax equipment and has been designed to act as some sort of virtual reality station. It is a powerful console that is also decked out with cutting-edge components and will be a convenient portable solution for virtual reality enthusiasts. The company did not divulge many details on the console.

Pimax Reality is a high-end virtual reality headset and it will set you back $2,399. However, buyers who already own Pimax gear will get steep discounts for the Reality 12K QLED. The new Pimax headset is scheduled for release in late 2022 so there is ample time left to save for this high-end VR rig.

https://virtualrealitytimes.com/2021/10/27/pimax-reality-12k-qled-pimax-launches-its-next-generation-headset/https://virtualrealitytimes.com/wp-content/uploads/2021/10/Pimax-12K-QLED-600x338.jpghttps://virtualrealitytimes.com/wp-content/uploads/2021/10/Pimax-12K-QLED-150x90.jpg2021-10-28T21:59:08+00:00Sam OchanjiBusinessThe past two months have seen frenzied launches of new virtual reality headsets. The latest is Pimax’s Reality 12K OLED VR headset. This is a next-generation virtual reality headset sure to take virtual reality to the next level with some impressive image resolution on the VR landscape that will make...Sam OchanjiSam Ochanjisochanji@yahoo.comAdministratorVirtual Reality Times

« Spacefolk City: This VR Games Lets You Build Space Cities
New Tech Glasses in 2021 Heralding a Surge in the VR and AR Industry »