Meta’s high-end standalone virtual reality headset, the Quest Pro, began shipping yesterday to buyers from across the globe. The most distinctive feature of the headset is its color passthrough which gives it mixed reality capabilities.

Some of the best software on Quest Pro can be used in mixed reality by mapping out the furniture and walls in your room. Marking out these areas makes the software room-aware and allows for interesting use cases of the physical surfaces in concert with the virtual reality content. You can, for instance, use an experimental feature known as “room setup” and clear out the small items on the floor to enable you to walk easily around the room without tripping on the obstacles in the room. However, this feature is still a work in progress so expect to find some bugs.

Below is a look at some of the first titles to support the new color passthrough feature: –

I Expect You to Die: Home Sweet Home

In I Expect You to Die: Home Sweet Home, you can use your Quest Pro headset to transform your physical room into a mixed-reality escape room. The experience was created by the virtual reality development studio Schell Games. The game is free but it needs a big guardian setup that goes far beyond the walls of your room as well as an empty wall that is roughly four to six feet away. Check it out here.

The Figmin XR app leverages full room awareness allowing you to quickly toss objects around and watch as they bounce off. Figmin XR’s developers have gone as far as importing the open-source Tilt Brush application. It even allows you to point in the air using your hands.

The Quest Pro headset is particularly suited for Meta’s Horizon Workrooms. You can use the app to repurpose your desk and transform it into a working surface or into a whiteboard. You can also use Quest Pro’s pen tips, located on the bottom of the Touch Pro controllers, as a fairly convincing virtual drawing tool. Horizon Workrooms is a free-to-use Quest app.

Arkio is an architecture-focused mixed-reality app that allows users to import the room setup layout, modify it and even add virtual objects to it to their liking.

The World Beyond is an experimental Meta sample project that was developed to showcase some of the tech giant’s big ideas. It leverages the user’s room setup and even aspects such as voice recognition for stuff such as a cute little creature running over you. The app even allows you to replace any wall that you wish with a colorful open pasture into the world beyond.

Tripp is a meditation and mindfulness app where you can unwind and allow yourself to breathe and be present in the moment. You can use this app to get yourself to relax and unwind. The app has also added color passthrough support along with room awareness on Quest Pro.

The Painting VR app features various creative tools designed to render a convincing virtual reality painter’s studio. Once you are done with the painting, you can even hang your masterpieces on the wall in VR.

The free app Gravity Sketch is already being widely used by game development studios in cooperatively planning some of their latest course designs. The app is widely used in design and collaboration use cases. It leverages the color passthrough functionality on the Quest Pro alongside the Touch Pro pen tip, enabling it to be used in sketching out on physical surfaces. The color passthrough functionality in the Quest Pro headset is accessed by grabbing and removing the virtual visor on your head.

The ShapesXR app provides a platform for design and collaboration for remote teams. The app can be used to mock-up and design ideas via its storyboard feature. ShapesXR also supports Quest Pro’s color passthrough functionality and the Touch Pro pen tips used to write on surfaces in virtual reality. This app also supports two new features in the Quest Pro headset: face and eye tracking functionality.

Demeo remains one of the most popular and best-rated Quest games. With the Quest Pro color passthrough functionality, you can now enjoy this survival game in mixed reality. The mixed reality in the game is called “AR Mode” and can be activated in the main menu settings. This prompts the user to set up their room in case they haven’t done that already.

After the completion of the setup process, you can place the virtual board game anywhere you wish to, including on surfaces such as countertops and dining tables before rolling the dice in the real-world environment.

The Color Passthrough Apps and Games

Wooorld is the closest you get to Google Earth in Quest hardware. It has a number of features including creative tools, and multiplayer along with a fun minigame that can be played with others where you will be dropped in some random location and have to work out where you are based on clues found in the environment. On Quest Pro, this world explorer app also offers a color passthrough.

Immersed app opens access to your PC in virtual reality complete with support for multiple virtual screens. It also has a multiplayer mode that allows you to work alongside others you are collaborating with. Immersed already has color passthrough support for Quest Pro. The app is entirely free.

Vermillion has grown into one of the most popular virtual reality painting apps. The app enables you to simulate wet-on-wet oil painting on canvas. You learn from the tutorials in the app in virtual reality and learn to paint using brushes, easel, canvas, and palette. With the Quest Pro color passthrough, all the elements in the app can be positioned in your real environment and you can use it to paint in situ. 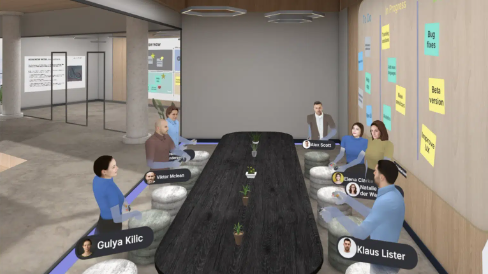 Arthur is a remote work and collaboration app on Quest. You can use the app to meet colleagues, hold discussions and make presentations in virtual reality. Arthur also has color passthrough support on Quest Pro that you can use with a tracked keyboard and a desk to work in virtual reality.

In Tribe XR, you can learn how to mix music and learn DJing skills using a simple and straightforward tutorial derived from the concept of rhythm games that allow users to learn how to operate a deck. Tribe XR supports full-color passthrough on Quest Pro, allowing you to superimpose the deck in your real-world environment.

Resolve is a tool where multiple users can view BIM (building information modeling) files and even collaborate on the review process for bigger construction projects. Now the app supports the mixed reality capabilities of the Quest Pro headset via the color passthrough which will enable you to view the models in situ or superimposed in your real-world environment.

VR musical sandbox @VrVirtuoso has been updated for the #QuestPro! You'll be able to mix the virtual with reality using Color Passthrough and tools to better blend between the two worlds.

Virtuoso is both a music creation tool and a sandbox where users can try out experiments with a number of unique virtual instruments along with the basic looping software. A new Virtuoso update now incorporates color passthrough support on Quest Pro. The new mixed reality function will enable Virtuoso users to position and play virtual instruments in mixed reality inside their own environment.

Take a break from all those enterprise applications and solve some puzzles in your own space with your own hands using full color passthrough 🙌#vr #ar #questpro pic.twitter.com/YEJkAHyzA6

Looking to task your mind? Try out Cubism, a seemingly simple puzzle game in which you will be assembling increasingly complex shapes from colorful blocks. The game is simple but addictive. You will be solving a 3D wireframe puzzle by determining the correct sequence as well as the orientation of various block pieces that vary in shape. Cubism now supports both full-color passthrough mode in Quest Pro and hand tracking.

Nanome is an immersive collaboration app where one or more users can view molecular data along with 3D models in virtual reality. Like many other apps, it now includes color passthrough support on Quest Pro, enabling users to view this mod in their real environment in a mixed-reality experience.

« HaptX Launches Smaller and Better Haptic Gloves Costing from $4,500
ForeVR Games Has Raised $10 Million in a Series A Funding »