Home » Hardware » Technology » You are reading »

Qualcomm is an industry leader in XR chips and its XR2 chip is its latest product which provides hardware manufacturers with new capabilities as well as new technologies. In the next phase of the development, Qualcomm has now revealed the reference designs along with the partnerships for the chipset, aimed at OEMs that are currently building their own XR2-based headsets.

The reference designs serve as a blueprint for in-house developments by Qualcomm’s hardware partners. The technical basis of Qualcomm’s reference designs are its XR2 chipset which have 5G support and have been specially built for standalone Virtual Reality and Augmented Reality glasses.

The reference design provides stakeholders with a rough guide on how to build hardware with its 5G-enabled Snapdragon XR2 chipset that has been designed for VR and AR hardware.

The reference design is a prototype from Goertek, an electronics company which has worked with Qualcomm before. It looks almost like Qualcomm’s reference design for the XR1 but the headset is able to showcase the unique capabilities of the XR2 headset including 5G support and support for up to seven cameras.

However, the reference design still features 2K resolution display panels per eye instead of the maximum of 3K resolution for the XR2 chip as a result of the current display resolution availability. The XR2 chip can handle up to 3,000 by 3,000 pixels per eye at 90Hz and it significantly improves the AI calculations. This will be extremely important for applications such as hand and finger recognition during hand tracking. The XR2 chipset is also compatible with the Lynx R-1 mixed reality glasses. 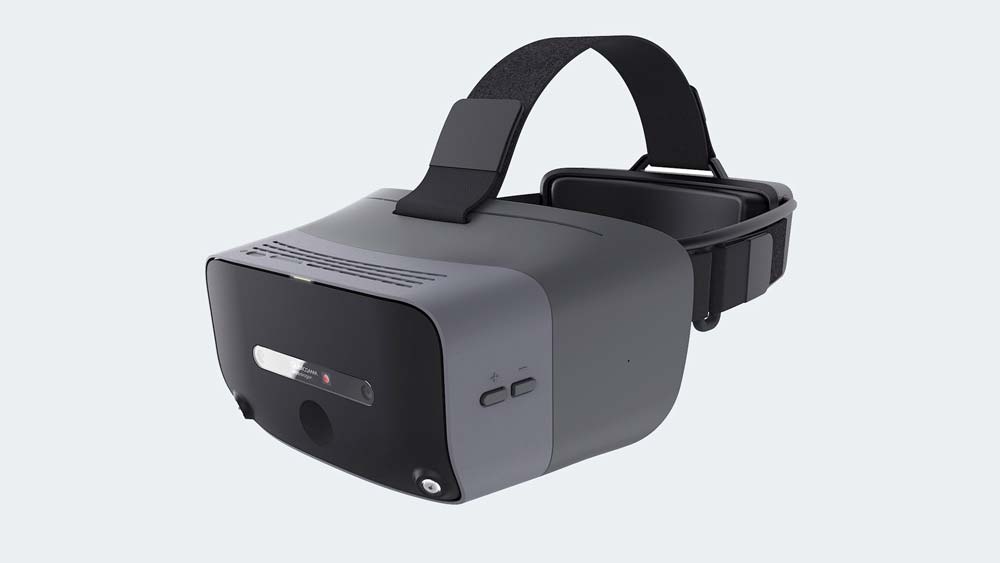 The XR2 reference design gives XR2 hardware access to developers before the actual products roll into the market. This provides developers with the opportunity to optimize their applications as well as experiences for the XR2 chipset before the commercialization of the AR/VR hardware that will be based on the chipset.

The 5G support through the optional X55 5G modem will enable OEMs to incorporate 5G connectivity along with mmWave and Sub-6 into their hardware. The reference design has already been tested and validated in collaboration with Ericsson, a world leader in 5G infrastructure which offers Sub-6, mmWave 5G connectivity as well as boundless XR.

Qualcomm uses the term boundless XR to describe the XR experiences utilizing 5G to leverage additional computing in the Edge cloud with Multi-Access Edge Computing (MEC). This results in low latency as well as high-performance computing.

Qualcomm now has a growing lineup of XR chipset. It will continue selling its XR1 chip that was announced in 2018. Qualcomm has stated that the chipset includes features that users would actually need for a high quality XR experiences such as its supports for the tracking for eyes, lips as well as the external space. Qualcomm is “confident” that XR2-based devices will begin rolling out this year although, like other XR hardware, the production schedules may be severely impacted by the coronavirus health crisis.

What Will be the Cost?

There is a strong push for 5G in the immersive industry but the technology will still be optional on many of the upcoming Virtual Reality and Augmented Reality headsets based on the new Qualcomm chip. The OEMs will be skipping 5G technology to cut on costs and to build cheaper and more affordable headsets which can easily plug into smartphones for 5G connectivity. A perfect test case will be Nreal’s upcoming Light smart glasses that cost $499.

It is still not apparent what the future 5G-enabled XR hardware will cost but Qualcomm has labelled its latest chipset as “premium” which might point to the future XR2 hardware being significantly more expensive than Facebook’s Oculus Quest headset which costs $399.

Qualcomm was initially slated to demonstrate its new 5G XR hardware during the Mobile World Congress 2020 which has since been cancelled due to coronavirus concerns.