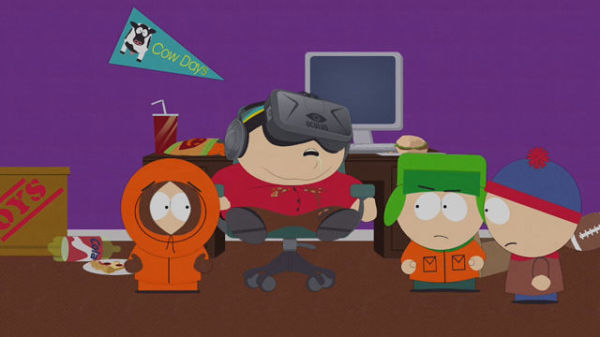 The show is very well known for its use of foul language, dark humor and (the basic theme around which it revolves) satire. South Park focuses on a lot of different topics and then uses scathing wit to comment upon those in the form of four main characters: Stan Marsh, Kyle Broflovski, Eric Cartman, and Kenny McCormick. The show is based in Colorado.

In this episode of South Park, titled ‘Grounded Vindaloop’, the focus is on the show’s regular scapegoat who goes by the name of ‘Butters’. Basically what they show is that Butters starts to lose his grip on reality because he has been spending too much time with the Oculus Rift headset on. This action leads to him being stranded in an alley somewhere, after which he gets stabbed by a prostitute.

Even though the Oculus Rift headset has yet to be released to the main consumer market, it hasn’t dampened anyone’s enthusiasm for the product. Especially after being used in such an immensely well received show, excitement levels are very high in anticipation. Fans have already started sending in letters and requests, begging the Oculus Rift team to launch the product for the public as soon as possible. After this episode in South Park, the anticipation of the fans has reached an all together new high which has everyone in high spirits. The creators of the show i.e. Matt Stone and Trey Parker are very interested in the Oculus Rift headset themselves. They claim to be serious gamers who would love to dabble in the virtual reality world brought to them by the makers of this gaming headset. This episode has generated a lot of buzz among audiences of all ages and ganders about the possible uses and advantages of the Oculus Rift headset and the advent of virtual reality in their daily lives.

Apparently, the episode by South Park has obtained amusing results by their audience, world wide. The whole thing has managed to create awareness about virtual reality and the Oculus Rift headset, make people laugh with the ridiculous sarcastic/offensive/violent theme of the episode and just generally prove that they are keeping up with the latest trends in technology. Virtual Reality Times will closely follow the progress of Oculus Rift’s latest headset and update you about any new details!

https://virtualrealitytimes.com/2014/11/14/oculus-rift-starring-in-south-park/https://virtualrealitytimes.com/wp-content/uploads/2014/11/South-Park-OR-e1415980007120.jpghttps://virtualrealitytimes.com/wp-content/uploads/2014/11/South-Park-OR-e1415980007120-150x90.jpg2014-11-14T16:30:02+00:00Anushay QaiserOculus RiftThis week, the incredibly popular show South Park focused on virtual reality, specifically using the Oculus Rift headset. South Park is an adult American animated show, created only for the older crowd.  The show is very well known for its use of foul language, dark humor and (the basic theme...Anushay QaiserAnushay Qaiseranushayqaiser@hotmail.comContributorAnushay is a writer from Pakistan, specializing in technology and futurism. She's a big VR fan, despite living in a country without much presence in high technology or virtual reality.Virtual Reality Times

Anushay is a writer from Pakistan, specializing in technology and futurism. She's a big VR fan, despite living in a country without much presence in high technology or virtual reality.
View all posts by Anushay Qaiser →
« Oculus Rift Support Coming Soon for Toybox Turbos
Dogwood Initiative Simulate Oil Spill Through Oculus Rift »