SpaceVR Will Let You Become an Astronaut in VR 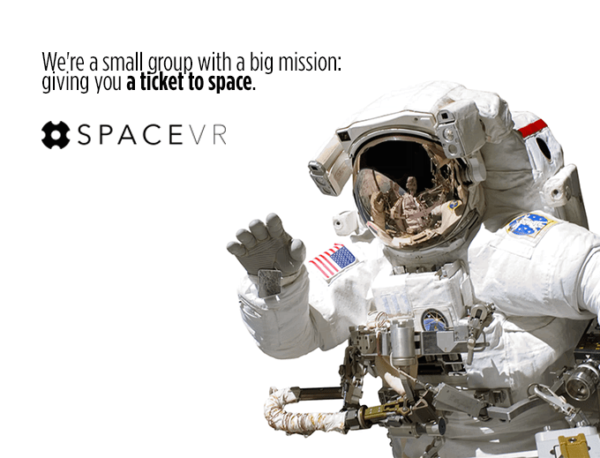 Have you ever fancied touring the outer space? In the history of mankind, only a handful of people have actually had the opportunity to get out in space. But for SpaceVR, all other 7 billion people on Earth will have the same experience – only within a virtual reality headset.

SpaceVR, a VR tech startup, aims to complete a round of crowdfunding over at Kickstarter to boost the launch of its specially-designed VR camera: Overview One. To make it possible, SpaceVR needs to earn at least $500,000 in 30 days for two main reasons: one, to create the Overview One and bring it to the International Space Station (ISS); and the other one, to fund SpaceVR’s first year of mainline operations as a tech startup.

SpaceVR’s Overview One will fit into a 3D-printed camera mount. The stereoscopic 3D VR camera will capture a live 360-degree view of space. While Overview One does all the hard work in space, SpaceVR will support a wide range of virtual reality headsets for the live VR stream to be seen on. The most popular VR headsets today will support SpaceVR, including the Oculus Rift, HTC Vive, Samsung Gear VR, and even the Google Cardboard.

The VR tech startup aims to make a subscription model available for everyone, at about $10 per month. In addition, SpaceVR also looks into the possibility of supporting the education sector by giving schools the opportunity to use SpaceVR’s technology as a teaching method. According to SpaceVR’s Chief Technology Officer Isaac DeSouza, the VR service is expected to be launched in December this year.

SpaceVR’s advisers include Apollo 14 astronaut Edgar Mitchell, the 6th person to ever walk on the Moon, and private astronaut Richard Garriott.

Once launched, users will be able to view livestreams captured from the cupola module, the viewing port of the ISS. Rare events such as space walks will also be a focus for SpaceVR’s live content. The initial streaming from space is planned in the first quarter of 2016. There are also ambitious goals in the pipeline for SpaceVR: to provide a VR live-stream from the Moon in 2017, from an asteroid in 2022, and from Mars in 2026.

For more information on SpaceVR, please visit the following websites:

https://virtualrealitytimes.com/2015/08/23/spacevr-will-let-you-become-an-astronaut-in-vr/https://virtualrealitytimes.com/wp-content/uploads/2015/08/2072dff7f05af0d5d7f0c4acc33f7ea8_original-600x401.pnghttps://virtualrealitytimes.com/wp-content/uploads/2015/08/2072dff7f05af0d5d7f0c4acc33f7ea8_original-150x90.png2015-08-23T09:58:57+00:00John Marco OscilladaKickstarterOculus RiftSimulationsStartupsHave you ever fancied touring the outer space? In the history of mankind, only a handful of people have actually had the opportunity to get out in space. But for SpaceVR, all other 7 billion people on Earth will have the same experience – only within a virtual reality...John Marco OscilladaJohn Marco Oscilladaoscilladajm@gmail.comSubscriberVirtual Reality Times