Many startups and companies are beginning to realize what VR can do for their businesses. And with the help of tech giants innovating VR from the ground up, VR tech holds an even larger promise of boosting many industries. With this, Nvidia is adding another technology to its virtual reality portfolio as its engineers continue to address challenges in the VR niche.

Iray VR’s capabilities will allow the creation of virtual environments that let users strap on a headset and peer around photorealistic virtual environments. This technology enables a car buyer, for example, to see every detail of the car he wants to buy with a very high level of accuracy.

The said technology taps into the power of GPUs to let users quickly generate immersive experiences of their designs with amazing accuracy. The company sees the technology to benefit a wide range of useful applications, such as in architecture and design.

VR and its cousin, augmented reality (AR), are rapidly growing in popularity in both the consumer and commercial markets, and tech vendors are rushing to address the demand. 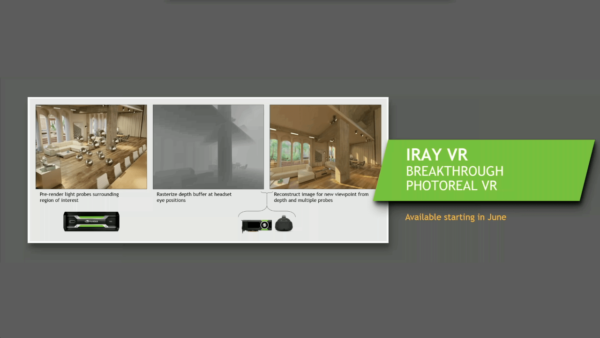 Huang showed off a VR simulation of Mount Everest built with 108 billion pixels of images of the mountain, while engineers also recreated an 8-square-kilometer section of Mars that users can see via VR headsets. During the keynote and via a remote link, Apple co-founder Steve Wozniak demonstrated the Mars software. In addition, Huang showed off the technology by using it to take a virtual tour of the company’s planned new headquarters.

The CEO also introduced Iray VR Lite, which uses similar ray tracing capabilities that can be viewed through something like Google’s Cardboard headset.

The Iray VR technology is designed to create more realistic worlds through improved rendering software that creates light probes around the scene — such as a room or the inside of a car — to see how light travels into and through the area. It enables users to view the scene with more realistic lighting based on where the person is standing in the virtual space.

Nvidia has been deeply involved in making mass-market to high-end GPUs, which is responsible for the bulk of its money right now. Over the past several years the company has made decisions to pursue new markets, including VR, connected cars and deep learning and artificial intelligence, all of which demand significant processing power that Nvidia’s GPUs can provide.

According to Nvidia, both the Iray VR and Iray VR Lite will be coming this June.