Should I Buy a Rift, Vive, Sony, or Wait? 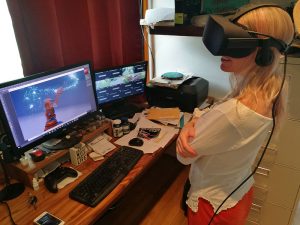 A reader of this website, Daniel, sent me an email with an important question I thought I’d share my opinion on with everyone:

I’m nearing the point to take the dive into VR.

In a previous stage of my life, I would have purchased all three major systems and likely had the full catalog of games. However, my life and values have shifted… but I still want to play!

I tested the Vive at a local VR play center. I was moderately impressed, but not ecstatic. I tried the Oculus at BestBuy and kind of liked it more, but still $800-$1000 to get it moving (Oculus and PC). Then there’s the PSVR (which I know isn’t as immersive, but as Star Wars, Batman and Resident Evil). Then again, Oculus has Rock Band which is actually my biggest draw for that system.

My other question is now that the Oculus is lowered to $399; is it going defunct? I saw on your site there is a new 2018 version, but unclear if it is a lesser-powered entry model or replacing the current unit.

Oculus is amazing but you need to get the third sensor and the ear buds. They shouldn’t really even sell it with only two sensors because too many of the best games, such as Arizona Sunshine, don’t work very well . It’s just as good as the Vive and now a lot cheaper. I recommend it.

It’s interesting that you mentioned not being “ecstatic” about your test with the Vive. There are really a lot of mediocre games for VR, and one that some people love will not appeal all all to others. To me, the best games don’t just have the best graphics, but they have the most emotional connection, take us places where 2D games just can’t, and have great immersion. The games for me would be Arizona Sunshine, The Climb, Super Hot, and the new dinosaur shooting game Island 359. These are the games I have people try who have never done VR, and they ARE impressed. Many people can’t handle them and end up nearly panicking, which to me means they’re great.

About the Oculus Rift 2, Oculus has decided not to join the tech war to constantly release better technology, and instead is waiting until their next system is an order of magnitude better than the current one, which means they won’t have a new system until at least 2019. They need to wait for graphics cards to be good enough, and for enough people to have these higher end cards. They could probably release something amazing next year, but so few people would be able to run it, they’d get a lot of flack in the media for not selling enough units, etc.

However, when it comes to headsets, the competition is set to leapfrog them. Rather than choose between Oculus, Vive, and Sony, you may want to wait to see what the Microsoft/Intel partners release, which should have much higher resolution than the Rift, inside-out tracking, and other improvements. People who have tested this higher resolution say that it’s remarkably better with the SDE (Screen Door Effect) almost gone. And only $400 or so. Dell, HP, Acer, etc have promised a release this year, so I recommend waiting. I’m going to buy one at the first opportunity and won’t be surprised if I stop using my Rift. There’s also new headsets coming from Samsung and LG that look promising. So if you can wait, then do.