HTC has launched its remote virtual reality collaboration tool Vive Sync in a free open beta. The free beta for remote employees and businesses enables businesses working remotely to be able to meet in virtual spaces by using customized avatars.

There are already a number of such remote online collaboration tools available such as Google Hangouts and Zoom. As countries grapple with strict lockdown procedures in the wake of the raging COVID-19 pandemic, many are finding themselves increasingly having to rely on such consumer and enterprise remote online collaboration tools. With the prevailing technology, these are mainly in the form simple video conferences or interactive discussions in Virtual Reality (VR) or Augmented Reality (AR). HTC Vive’s beta launch of the Vive Sync is the latest attempt at immersive collaborations.

The Vive Sync tool was first unveiled in 2018. The tool was initially developed by 2 Bears Studio of the Arcade Saga and Super Puzzle Galaxy fame as an internal collaboration tool that the developers used to collaborate between the studio’s worldwide offices. Following the announcement, it had remained in closed beta and was only accessible via invitations. Now that Vive Sync has moved into beta, that closed beta situations changes now enabling businesses and their employees to test out the collaboration tool.

Up to 30 users can simultaneously join a Vive Sync session. The participants will use avatars that have been customized with the Sync Avatar Creator app on mobile devices.

The collaborating teams will be able to create their own avatars just by taking selfies. The selfies will provide them with a base to work from which they can subsequently adjust for body types, skin tone, hair style, glasses along with a number of other accessories. The tool even includes full-body tracking that enables natural movement representation. 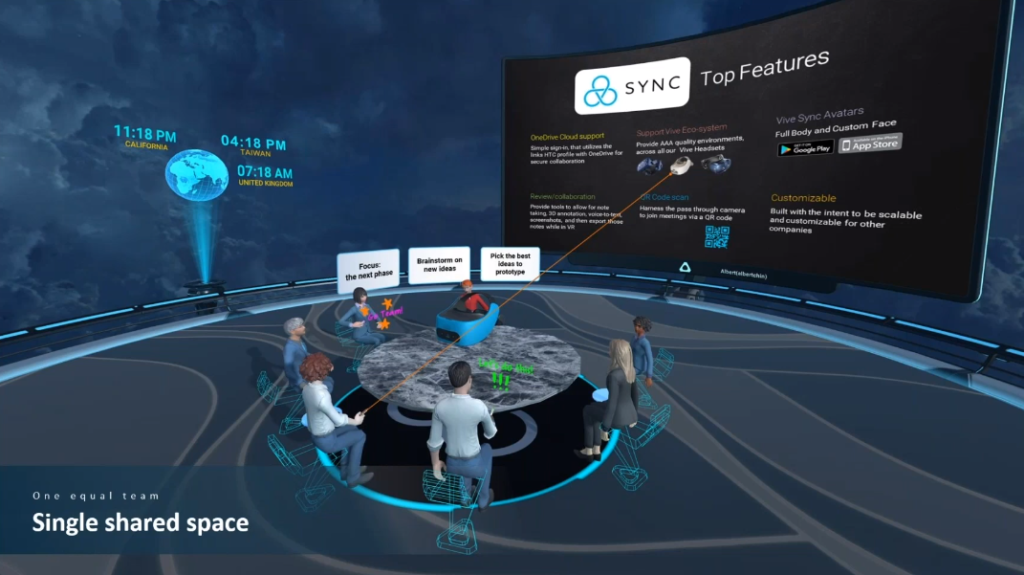 The Vive Sync sessions can take place in a conference room or within an auditorium setting based on what is most appropriate for the session. It also supports the importation and viewing of files from One Drive during the live sessions. The platform also supports the ability for users to place and examine 3D models in the virtual space. Non-VR participants are able to join the Vive Sync sessions via a “PC Viewer”.

The integration of Sync with Microsoft OneDrive and OneDrive enables users to gain secure access of their files in virtual reality including PDFs, videos and PowerPoint files. Even 3D models can be imported and reviewed into the Sync space thanks to file formats such as FBX and OBJ and Unity Asset Bundles.

The Vive Sync collaboration tool only supports the Vive family of headsets at the moment including HTC Vive, Vive Pro, Vive Pro Eye, Vive Focus, Vive Focus Plus and Vive Cosmos VR headsets. HTC is planning to make future upgrades to the tool to incorporate support for other popular headsets including Oculus Rift, Oculus Quest, the Windows Mixed Reality headsets as well as the Valve Index headset. Other planned features of the VR headset include host controls and recording capabilities. The collaboration tool also supports a viewing mode for iOS and Android mobile devices.

Although it is currently mostly compatible with the HTC Vive headsets, the platform will be designed to be hardware-agnostic much like the Viveport retail portal. Support for the Oculus headsets will be incorporated before the end of the year.