Synagogues Destroyed in the Holocaust Reconstructed in Virtual Reality

The Second World War was accompanied by the unparalleled destruction of cultural and architectural heritage in Europe. Given the antisemitic policies of the Third Reich, synagogues, many of which were architectural marvels that had stood for centuries, were targeted in pogroms in the run-up to and during the war. Now a scientist in Germany is retrieving this lost architectural heritage by reconstructing some of the places of worship in virtual reality. 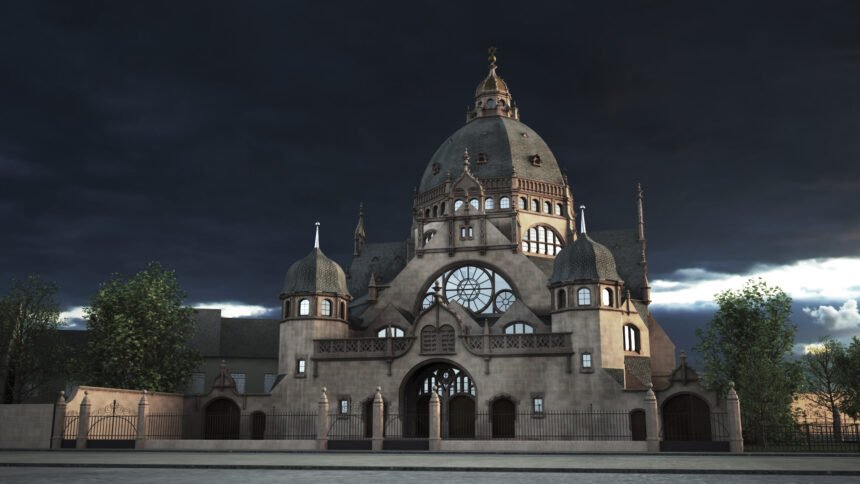 The scientist, Marc Grellert, from the Technical University of Darmstadt, Germany has already reconstructed 25 synagogues in virtual reality. This is made possible by the continual evolution and refinement of VR technologies which allows for very realistic recreations, making it a low-cost and convincing media for rendering some lost pieces of heritage to modern audiences.

Grellert’s VR reconstruction of the synagogues was done using the blueprints of the buildings, photos as well as descriptions from contemporary witnesses collected from their memoirs. The scientists developed the digital models of the synagogues with the assistance of students from TU Darmstadt’s Digital Design Department. Some three to four students worked at a single synagogue for three semesters where they learned the technical aspects of the rendering as well as the history and heritage behind the buildings and how the communities that lived here connected with the places of worship.

One of the challenges Grellert faced when doing the digital reconstruction is that many of the old photos of the synagogues were in black and white and it was initially difficult to determine the colors of the interiors of the buildings. In some cases, the team relied on eyewitness accounts from their own memoirs describing these places of worship before the war. Models were subsequently created using the 3D Studio Max software. Textures such as a brick or wood façade were also added. Finally, the lighting aspect was incorporated into the reconstructions. The team had to figure out the directions from which the sun shines into the buildings to make virtual recreation as authentic as possible.

The impressive VR reconstructions breathe a fresh lease of life to these almost forgotten cultural and architectural marvels, some of which were completely stripped down after the war.

With a VR headset, anyone interested in traveling down the memory lane can go back in time and explore the grandeur and aura of the buildings as they once looked. Viewers can sit on a bench as the rays of light stream in through the buildings’ windows and to the sounds of choral singing. When you press a controller button, your perspective of the gallery is changed and the sacred interior of the synagogue opens up for exploration.

The rendition does a convincing job of bringing a lost world back to life. For instance, the synagogue in Dortmund is reconstructed in VR with its oriental-looking domes while the old synagogue in Hanover comes back to life with its velvety red walls. The modern-looking synagogue of Plauen, built in the Bauhaus style of the time is rendered, too, with its original blue and green walls. Unlike the older synagogues that are often built in Romanesque styles and date back centuries, the one in Plauen was built in 1930 but was destroyed in 1938 during the Kristallnacht.

Grellert’s virtual synagogue reconstructions have been exhibited since the end of 2021. An exhibition has been set in a high-rise bunker located at the Friedberger facility in Frankfurt where visitors can come in, put on Meta Quest 2 headsets, and be immersed in the Frankfurt Synagogue that was located at this very location. This experience is provided as a virtual reality film so as not to overwhelm the majority of visitors with the complexity of an interactive virtual reality app.

Another of Gellert’s VR synagogue reconstructions was exhibited in Erfurt and drew on the inspiration of the location to recreate the Great Synagogue in Erfurt. A team of employees from the University of Applied Sciences Erfurt and the University of Jena built the 3D model for this synagogue reconstruction. Visitors can immerse themselves in the synagogue, which was destroyed in the Kristallnacht, at three locations in Erfurt. You can also view a 3D model of the Great Synagogue in Erfurt via a web interface on the project’s website although a virtual reality rendition provides the most immersive way to experience the architectural heritage of the pre-war synagogues in Germany.

Grellet has also used 3D models that can be printed out of a computer as a physical model of the synagogues through the rapid prototyping method. One of Grellet’s synagogue models has been rendered in plaster and in a cross-section and can now be viewed at Kaiserslautern. The Jewish Museum in Berlin is also exhibiting four physical synagogue models.

Grellet’s synagogue reconstruction projects illustrate how virtual reality, and in the future, augmented reality could be used to virtually recreate living history and bring lost heritage to life inside a virtual reality headset. This is important as wars and the accompanying destruction continue to rage across the world -in Ukraine, Syria, Ethiopia, Iraq, and Armenia- and such wars most often happen in areas with a rich historical and architectural heritage that are destroyed in the fighting.

https://virtualrealitytimes.com/2022/05/10/synagogues-destroyed-in-the-holocaust-reconstructed-in-virtual-reality/https://virtualrealitytimes.com/wp-content/uploads/2022/05/Mart-Grellert-VR-synagogue-recreation-600x338.jpghttps://virtualrealitytimes.com/wp-content/uploads/2022/05/Mart-Grellert-VR-synagogue-recreation-150x90.jpg2022-05-10T23:47:18+00:00Sam OchanjiGamingTechnologyThe Second World War was accompanied by the unparalleled destruction of cultural and architectural heritage in Europe. Given the antisemitic policies of the Third Reich, synagogues, many of which were architectural marvels that had stood for centuries, were targeted in pogroms in the run-up to and during the war....Sam OchanjiSam Ochanjisochanji@yahoo.comAdministratorVirtual Reality Times

« Paire VR: The Omegle of VR Early Access in May 2022
Unreal Engine 5 Clip of Japanese Train Station So Photorealistic It’s Indistinguishable from a Real Vid »