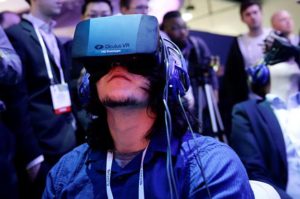 Palmer Luckey, an affable looking fellow with hair that perpetually appears just-tousled, has a strange collection. Bulky, plastic, and failures all: he feels his menagerie of early attempts at virtual reality headsets is the largest on Earth.
But Luckey, founder of Oculus VR, has made his own model, the one that might finally, at long last, bring virtual reality into the mainstream.
Oculus Rift is a small black headset that brings the user into an immersive sight and sound environment. At present, its head-mounted screen measures about seven inches across. This affords a high-definition picture, with (in the newest models) a field of view exceeding 90 degrees horizontally and 110 degrees vertically, which immerses the user.
The Rift, available as a Development Kit, has thus far been applied to video games, which require software to integrate them. The lineup includes Left 4 Dead, Skyrim, Portal 2, Half-Life 2, and BioShock. Though there’s a market for making a rabid gamer feel that increased rush that comes from sensory overload, one wonders if and when virtual reality will become a ubiquitous part of our culture.

And that is the question that Luckey and Oculus Rift have been asking since their 2012 founding. Bad headset collector Luckey became headset developer at age sixteen and, a few years later, landed a gig at USC’s Mixed Reality lab. While taking a breather from tinkering with headsets, he was cruising Internet forums when he found himself taking with John Carmack, the gaming shaman behind Doom and Quake.
Luckey gifted Carmack a headset and the later took the liberty of demonstrating it at a tech conference. The reaction spurred Carmack to ultimately join with Luckey, and OculusVR was founded in June of 2012.
OculusVR launched a kickstarter campaign to rejuvenate what seemed like a dorky 80’s farce that had never gotten off the ground. The concept of virtual reality—stepping into other worlds, knowing what it’s like to do something you’ll never do in real life—had lodged itself in the modern world’s consciousness, but had done so as the kind of thing with a perpetual one day attached to it.
Whether or not there was enthusiasm for the project became clear immediately, when Luckey and crew raised two-thirds of a million in a day. In three days, they hit the million mark.
Then came the alliances with video games, with pushes to apply this tech where its niche audience lived. Dev Kits were developed, and sold like hotcakes. Early reviews were mixed, with the big problem being that the view range didn’t turn fast enough when the user did. This essentially means a user’s equilibrium wants it to be in one place while what the person is seeing is off to the left or right. The result: nausea. And the things were big and bulky.

Subsequent developments included a new model called Crystal Cove, and Dev Kit 2. Along the way, Oculus licked the latency problem with strategies like inserting some black frames to make movements smoother and going from LED to OLED.
As 2014 rolled around, with these problems fixed and with optimism caused by the promise of better technology, the public’s appetite for working, affordable VR was as high as ever. Oculus VR was the independent company that had pulled off a stunning kickstarter coup and was probably poised to be, at least at first, the giant of virtual reality. And then facebook bought them. For $2 billion dollars. No longer could virtual reality be included in the list of Cool Technologies Not Yet Bought by Zuckerberg.
But whatever qualms purists may have had about the project becoming part of the facebook empire, the development funds are not insignificant, and they promise to make the launch of working VR to the American public farther ranging than it may have been otherwise.
It’s easy to reason that it’s a bit of a shame to devote such long-heralded and amazing technology like VR solely to video games. It would be as sad as Web 2.0 being so dominated by vids and pics of cats. Zuckerberg’s vision speaks to that. When he discusses his grand vision, it includes simulating the expensive seats at a basketball game, having a virtual doctor’s appointment with an expert halfway around the globe, and of course, being “in the same room” with your loved ones.
Meanwhile, The Gallery: Six Elements is the first video game designed expressly for use with Oculus Rift. This coincides with the commercial—not Dev Kit—release of Rifts, which is tentatively slated for 2015. They aim to price it under $300.
Oculus is leading the way with VR and providing the template for the first working device that will hit the masses. Widespread use, the hang out with your grandma type ubiquity, will almost certainly allow for many other companies to get theirs.
photo credit: theguardian.co

https://virtualrealitytimes.com/2014/08/12/introduction-to-oculus-rift/https://virtualrealitytimes.com/wp-content/uploads/2014/08/Oculus-Rift-user-009-600x398.jpghttps://virtualrealitytimes.com/wp-content/uploads/2014/08/Oculus-Rift-user-009-150x90.jpg2014-08-12T19:11:19+00:00Jeff MaehreOculus RiftPalmer LuckeyFacebook’s New Acquisition Is the Best Candidate to Bring Virtual Reality Mainstream Palmer Luckey, an affable looking fellow with hair that perpetually appears just-tousled, has a strange collection. Bulky, plastic, and failures all: he feels his menagerie of early attempts at virtual reality headsets is the largest on Earth. But Luckey,...Jeff MaehreJeff Maehrejmaehre@gmail.comAuthorJeff Maehre is a freelancer writer who specializes in tech subjects and e-books. His personal website is http://jeff-maehre.squarespace.com/Virtual Reality Times

Jeff Maehre is a freelancer writer who specializes in tech subjects and e-books. His personal website is http://jeff-maehre.squarespace.com/
View all posts by Jeff Maehre →
« Uncharted 4 will “probably not” use virtual reality
Memorift: Virtual Reality Nostalgia »