Home » Software » You are reading » 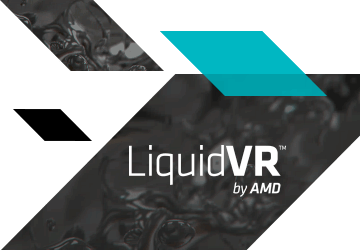 During the Game Developers Conference, AMD made a huge presence to show off its latest advancements in graphics processing, especially when it comes to games. Not only games are given importance, but also on virtual reality technology as well. AMD recently unveiled its cutting-edge graphics technology in improving the VR experience of the future. Named as the LiquidVR technology, AMD is poised to bring an even greater depth and realism to the existing virtual reality experiences, jumping into the future of VR as a mainstream consumer technology.

The LiquidVR technology is an initiative of AMD to enhance the overall VR experience for everyone. AMD put huge considerations in comfort, ergonomics, and performance of the VR technology in its integration to many hardware available on the market today. LiquidVR is a patented and trademarked technology created by AMD to give something the company calls as “presence” – which is simply stated as “a state of immersive awareness where elements within the virtual reality world seem real.”

One aspect of virtual reality technology where LiquidVR has been proven to be beneficial is the reduction of motion sickness by lowering the latency or the “lag” between the user’s movement and the reaction of the elements within the display. By leveraging the power of AMD’s latest graphics hardware and proprietary graphics software, LiquidVR is able to reduce the motion-to-photon latency of less than 10 milliseconds – a very minute numerical value that equates to a better and more comfortable VR experience.

AMD is making its proprietary LiquidVR technology to fit a wide range of VR devices. Not only this technology is compatible for VR head-mounted displays, but also to conventional computers as well to benefit realistic gaming experiences. The graphics company also seeks to make LiquidVR as a stepping stone in the future integration of kinesthetic senses to virtual reality experiences, meaning the future of VR could have a realistic interaction with the physical world while maintaining the so-called “presence” within the virtual world.

For more information on the LiquidVR technology by AMD, please visit the following websites: