Technology companies are coming up with mindboggling innovations geared at creating more compelling VR and AR. Many of these solutions are still stuck in R&D labs due to the complexity of implementation or lack of funding.

While there is a concerted effort to develop the most powerful and affordable virtual reality headsets, there is also a parallel effort geared at developing VR peripherals that aim to make VR experiences more compelling. Currently, more concerted effort is being put towards developing haptic feedback technology that will allow users to touch and feel something in VR. There is also a peripheral effort in the development of VR olfaction experiences that simulate the sense of smell in virtual reality.

This new technology leverages the biological fact that human brain is susceptible to dynamic visuotactile stimulation. In other words, the concept is based on the ability to fool the human brain through the use haptic feedback and visual stimuli. The brain is an intriguing organ and apparently, it is possible to fool it to perceive certain sensations where none exist.

The device for this is called a Touch Rigid Controller or TORC and is a haptic feedback innovation that is capable of mimicking the feel of 3D objects in a virtual reality environment. It uses haptics to mimic the elasticity of squeezed objects. The TORC is a rigid controller that is capable of rendering a haptic sensation that mimics that of non-rigid, compliant objects. Microsoft hopes such a technology will revolutionize haptics and usher in a new level of immersion and tactility to VR.

The technology makes the user feel as if they are squeezing a stress ball between their forefinger and the thumb. While the TORC device is solid and without any visible moving parts, it can trick your brain into perceiving an elastic or squishy feel. Microsoft has also said that variations of this technology could find their way in multiple use-cases ranging from styluses to gamepads.

As a solid device, it is quite different from other haptic innovations that have focused on the development of virtual reality touch gloves. Instead of moving parts, the TORC is designed with internal touch and pressure sensors that will detect the position of your moving thumb. It also uses two internal actuators that vibrate beneath the two other grasping fingers to deliver vibro-tactile sensations and mimic various textures. 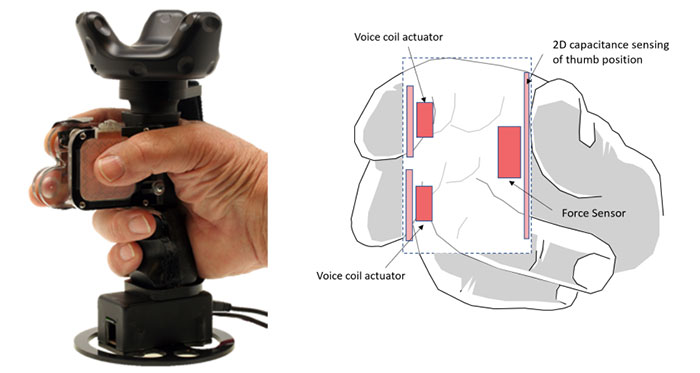 There is a capacitance-based 2D trackpad above the pressure sensors that are beneath the thumb. The trackpad runs parallel to the other two sensors. It is this trackpad that enables the user perform the precise manipulation of objects. When a user slides their thumb around the trackpad, this physical motion will be translated into a movement in virtual reality. However, while your two physical fingers are still, the virtual representation twists your fingers counter to the thumb motion to create a rotation. The pressure sensor creates the squishing sensation on your fingers to mimic the feeling of touching something elastic.

Suppose a user is holding an elastic object and they apply a force on the TORC, the virtual object will be squeezed. In the real sense, the user’s physical fingers have not moved but the visual stimuli of movement created in the virtual world along with the rendered haptic sensation will combine to create the perception of touch or feel which can be quite compelling.

When a user moves their thumb to rotate or press on an object in virtual reality, they will feel the feedback of both the depth and the motion that will bring out the sense of texture and depth. This way, the device is capable of delivering very rich haptic feedback for various kinds of objects enabling the users to perceive varying degrees of pseudo-compliance and textures when they are handling virtual objects.

The most innovative feature about the TORC is that it allows for the dexterity of finger movements which enables the users to apply realistic manipulations of virtual objects in VR which is also quite scalable and extensible to multiple touch use-cases.

Microsoft developed the technology in partnership with KAIST which is a national research university in South Korea. It began as a means of simulating the squeezing of rubber stress balls in virtual reality which is currently not feasible with consumer-grade VR controllers.

While the physical fingers holding the device will not move while squeezing the TORC, the user is able to see the virtual ball squeezing on the screen and they will feel this effect in their hands thanks to the haptic feedback. The TORC feedback can also be used in picking and releasing objects or grasping and turning keys among other applications.

The TORC can also be applied in rotating virtual objects by moving the thumb while the fingers hold the object in place. During this process, the “rendered vibrations” will convey the object’s properties like the textures or the pseudo-compliance to your fingers. What this technology has accomplished is that it has created a technique whereby the vibrations of the solid device will trick your fingers, or ultimately your brain into thinking that you are feeling a certain type of object.

The current design of the device has abstracted most of the actions although Microsoft wants the technology to immerse users into an uber-realistic virtual reality experience where the user will get the feeling that they are directly interacting with the virtual world and not merely manipulating objects using menus. Such a highly immersive experience will unravel lots of possibilities for developers enabling them to create VR experiences that will engage up to three sensors: sight, sound and touch.

If you combine these with the other initiatives to make virtual reality more immersive such as VR olfaction or the simulation of the sense of smell, the sensation heat and cold or the sensation of blowing air in someone’s face, it is possible to see how future virtual reality experiences will be absolutely compelling for users, creating virtual worlds that will mimic our real world in every sense and aspect.

The TORC sensors are very tiny and can virtually be incorporated into any devices ranging from the gamepads to VR controllers and even in the stylus that many currently use with their tablets so it has a better chance of being more commercially viable than other haptic systems currently under development. With the TORC device, the sensation of touch can be simulated in a broad array of tech portals. The small size also means it will only be applicable in small precision manipulations.

The TORC device will be showcased at the ACM CHI Conference on Human Factors in Computing Systems to be held in Glasgow UK from May 4-9. .

https://virtualrealitytimes.com/2019/05/03/microsofts-torc-controllers-to-provide-rich-haptic-feedback/https://virtualrealitytimes.com/wp-content/uploads/2019/05/Microsoft-Haptic-Feedback-600x337.jpghttps://virtualrealitytimes.com/wp-content/uploads/2019/05/Microsoft-Haptic-Feedback-150x90.jpg2019-05-03T23:52:22+00:00Sam OchanjiHapticsHardwareTechnology companies are coming up with mindboggling innovations geared at creating more compelling VR and AR. Many of these solutions are still stuck in R&D labs due to the complexity of implementation or lack of funding. While there is a concerted effort to develop the most powerful and affordable virtual...Sam OchanjiSam Ochanjisochanji@yahoo.comAdministratorVirtual Reality Times