Automakers are beginning to explore ways through which they can revolutionize in-car entertainment, particularly as autonomous car technology continues to grow in sophistication. We are nearing a point where we will have cars that will be completely self-driving and that will raise other concerns and ethical issues. What, for example, does the driver do when they are no longer involved in steering the vehicle? What about the passengers?

Automakers are increasingly tapping into immersive technologies such as augmented reality and virtual reality to solve these questions. Audi, for example, has recently unveiled a new VR system that will transform the vehicle into a rolling video game capable of reacting to the car’s movement.

The latest automaker to hop onto the immersive trend is Jaguar Land Rover which has just announced that it is building an innovative head-up display which will enable passengers to stream 3D movies from the comfort of their seats. The system will utilize hand and head-tracking to track the user’s position and enable them to watch 3D movies without having to rely on individual screens or shutter glasses.

Jaguar’s next-generation head-up display will also be able to stream real-time safety information to the drivers. The new and powerful 3D head-up display will be able to project safety alerts such as hazard detection, lane departure and satnav directions. It will also help in minimizing the impact of poor visibility weather or light conditions that could impede safe driving. The use of augmented reality adds a perception of depth to the image by mapping messages directly onto the road. 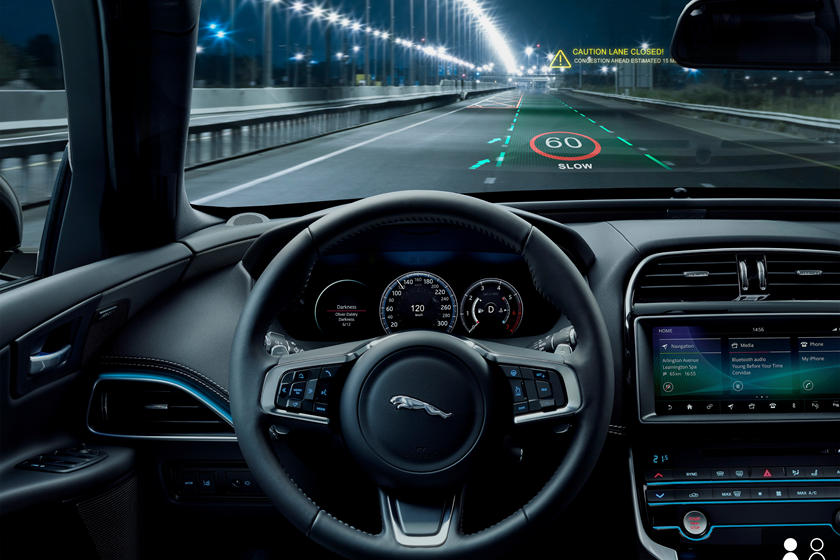 In Germany, studies have shown that the use of Stereoscopic 3D displays within the automotive setting can help in enhancing the reaction times for the “popping out” instructions while also helping increase the driver’s judgment of depth.

Jaguar believes that in the autonomous driving future, the infotainment technology will grow to allow participants to display personalized experiences like movies, points of interest or the journey details with all of these optimized to suit the seating position. The system will also allow ride-shares to independently pick their own preferred infotainment. They won’t be constrained by technology to watch the same content at the same time. For example, it would be possible to have several passengers sharing a ride in an autonomous vehicle to select their own choice media that will be optimized their seating position.

Jaguar’s research for the head-up display was carried out in collaboration with the Center for Advanced Photonics and Electronics at the University of Cambridge. Focus was on developing a head-up display that would be as close as possible to the real-life driving experience thereby allowing drivers to react as naturally as possible to prompts and hazards. The technology is part of Jaguar Land Rover’s Destination Zero roadmap that will see the company move towards a safer, more intuitive as well as smarter future.

The research into next-generation head-up display is also part of Jaguar Land Rover’s ‘Smart Cabin’ vision where it will apply technologies that merge to bring forth a personalized space inside the motor vehicle for both the driver and the passengers and which deliver not only entertainment but also safety and convenience for an autonomous driving future.

Jaguar Land Rover’s Destination Zero refers to the company ambition to create safer and healthier societies with cleaner environment. Jaguar relies on relentless innovation to adapt its products towards this vision that will help bring about a cleaner and safer future with zero emissions, zero accidents and zero congestion.

https://virtualrealitytimes.com/2019/08/22/jaguar-land-rover-develops-new-3d-virtual-reality-in-car-experience/https://virtualrealitytimes.com/wp-content/uploads/2019/08/Jaguar-3D-VR-Tech-600x400.jpghttps://virtualrealitytimes.com/wp-content/uploads/2019/08/Jaguar-3D-VR-Tech-150x90.jpg2019-08-22T09:14:50+00:00Sam OchanjiInventionsTechnologyCutting-edge immersive entertainment for an autonomous future. Automakers are beginning to explore ways through which they can revolutionize in-car entertainment, particularly as autonomous car technology continues to grow in sophistication. We are nearing a point where we will have cars that will be completely self-driving and that will raise other...Sam OchanjiSam Ochanjisochanji@yahoo.comAdministratorVirtual Reality Times