There is currently a frenzied drive to develop haptic feedback for virtual reality. All the contraptions and prototypes that have emerged so far have been bulky and cumbersome devices that would be impractical for average users.

The sense of touch is key to realizing a high level of immersion in virtual reality. It plays an important role in the perception of our surroundings in the real world. Within a virtual reality environment, accurate and refined haptic feedback helps make the experience even more realistic. 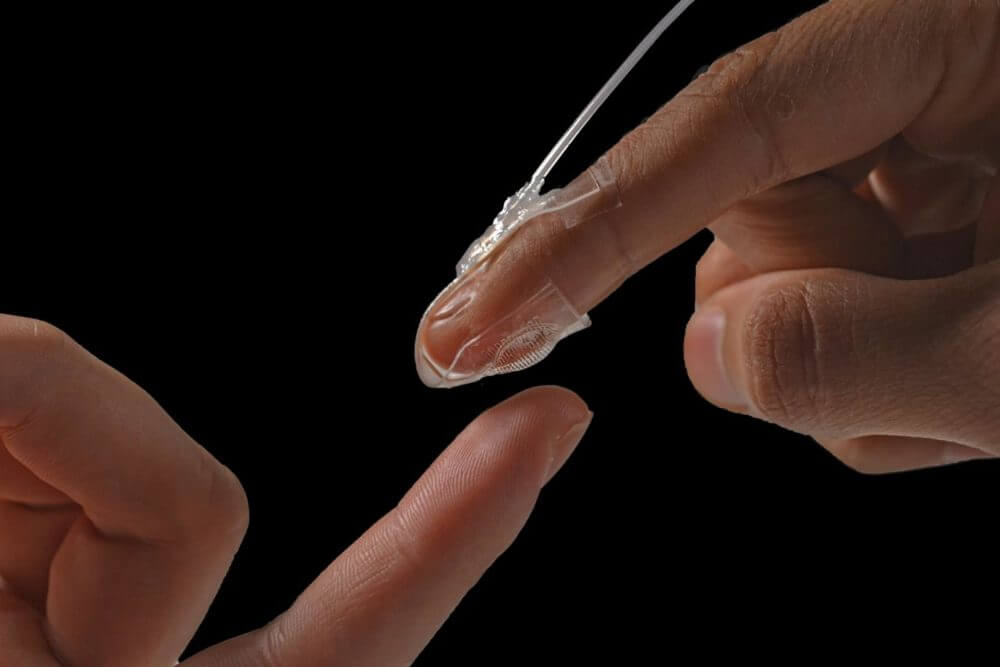 The latest haptic innovation is a soft, flexible and artificial skin that has been made from silicone and electrodes. According to the creators, the artificial skin haptic feedback can enhance the human-computer and human-robot interfaces in virtual reality as well as in medical rehabilitation applications.

The soft and flexible artificial skin uses the skin’s system of actuators and soft sensors which enable it to conform to an actual shape such as the wearer’s wrist and then transmit this feedback to a microcontroller in the form of vibrations and pressure.

The strain sensors continuously measure the deformation of the skin in order to provide a corresponding haptic feedback which can be adjusted in real time to generate a very realistic sense of touch. This is according to the team at the Swiss Federal Institute of Technology in Lausanne that developed the technology.

The human skin contains soft pneumatic actuators that make up a part of the membrane layer and which can be inflated when air is pumped into it. The soft electrodes in the artificial skin haptic technology are contained in the sensor layer that measures the deformation of the skin and then transmits this data to the microcontroller. Additionally, this haptic artificial skin can stretch up to four times of its original length for up to a million cycles. This elastic feature will be particularly important for various real-world applications.

This is the first time that a technology has been developed which consists of an artificial skin into which sensors and actuators have been integrated.

The haptic technology can be put into various wearable applications such as the testing of a patient’s proprioception in medical uses.

The scientists have already tested it on various users’ fingers. They are still refining the technology further. The scientists plan to eventually develop a fully wearable prototype for diverse applications including augmented reality, virtual reality and medical rehabilitation applications.

https://virtualrealitytimes.com/2019/09/29/new-artificial-skin-provides-haptic-feedback-and-could-find-applications-in-vr-and-rehabilitation/https://virtualrealitytimes.com/wp-content/uploads/2019/09/Haptic-Artificial-Skin-600x400.jpghttps://virtualrealitytimes.com/wp-content/uploads/2019/09/Haptic-Artificial-Skin-150x90.jpg2019-09-29T19:31:25+00:00Sam OchanjiHapticsHardwareTechnologyThere is currently a frenzied drive to develop haptic feedback for virtual reality. All the contraptions and prototypes that have emerged so far have been bulky and cumbersome devices that would be impractical for average users. The sense of touch is key to realizing a high level of immersion in...Sam OchanjiSam Ochanjisochanji@yahoo.comAdministratorVirtual Reality Times