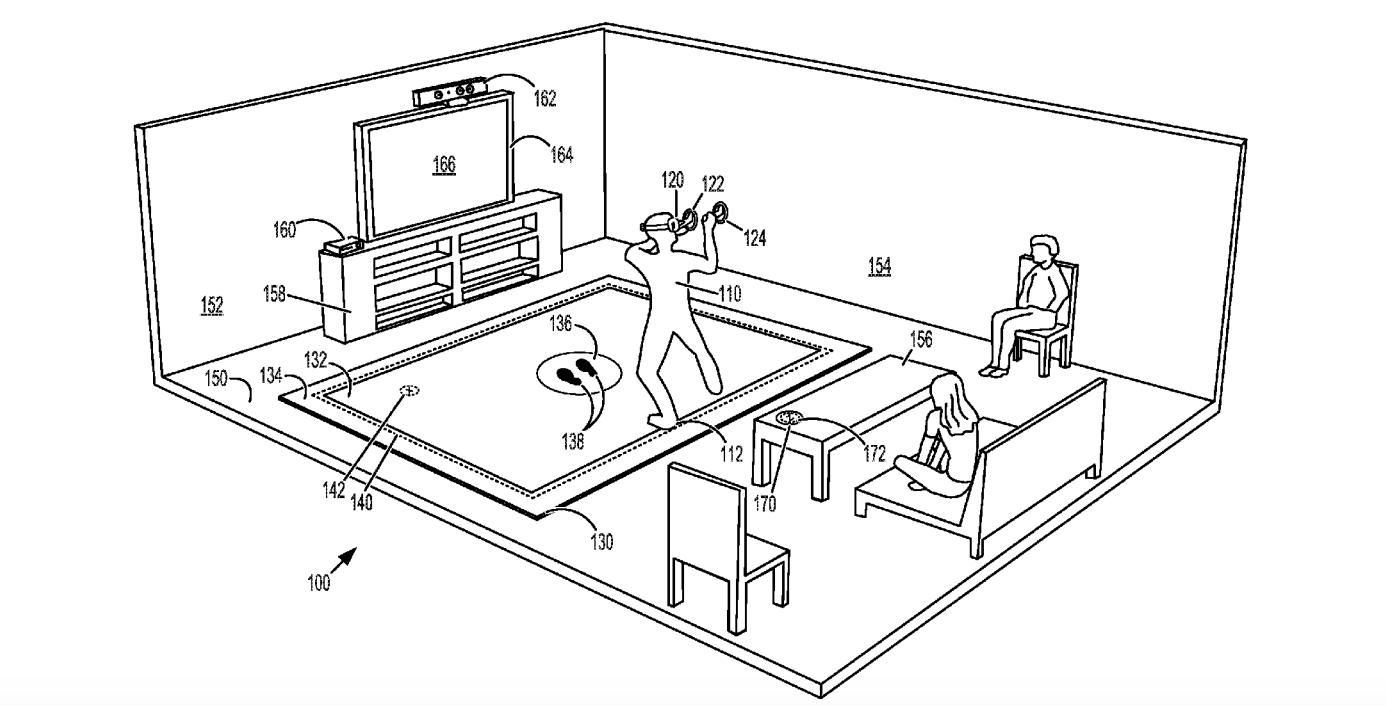 The patent for a “virtual reality floor mat activity region” was published this week by the U.S. Patent and Trademark Office. The patent solves a real-world problem faced by many virtual reality users: while virtual reality gives them full immersion, it entirely blocks out the outside world including the real world obstacles in the spaces in which they are operating in such as the walls, shelves, coffee tables and any other objects that players might bump into when immersed into the virtual reality environment.

Most current virtual system aim to eliminate such physical risks through guardian systems implemented into the platform. Such guardian systems display warning messages when a user is about to step out of the play space. In a bid to protect users, some guardian systems even make the virtual world completely disappear. However, in spite of these warnings, accidents are still happening according to various social media reports. In Russia, a virtual reality gamer was reported to have died after falling through a glass table in 2017. 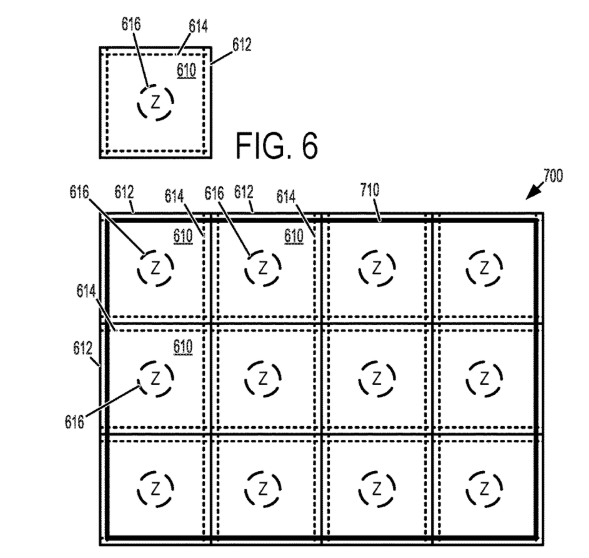 Microsoft’s patent application aims to solve these problem by building on these ideas and adding some extras to make this VR safety harness more effective.

The patent application describes some of these extras as including special fiducial markers that the virtual reality headset can use to recognize mats and adjust the space settings properly. The patent is also exploring the concept of a dedicated start position where players could, for example, position their feet on special foot markers at the center of the mat when launching the virtual reality experience.

According to the patent application, there is also the possibility of adding pressure sensors directly on the mat. These pressure sensors would be spatially distributed and integrated into the mat and they will detect the force or physical pressure applied on the activity surface of the mat.

These pressure sensors will also allow for the virtual reality system to identify the location the user is standing on in relation to the mat without a requirement that an optical sensor visually detects the user.

Microsoft’s virtual reality floor mat could also provide users with haptic feedback, according to the patent application. The patent says the mat could have at least one vibration device(s) that are integrated to the floor mat to generate vibrations on the floor mat and augment the VR experience.

The patent also includes a detailed description of the various possible implementations of the mat. One of these describes an innovation that would enable customers to customize their own play space by using interlocking tiles.

The patent application also mentions that the VR mat could work with Microsoft’s Xbox in addition to the PC-based and standalone VR headsets. The document suggests that some implementations of the computing device “may take the form of a gaming console” along with HMD device and peripheral control devices. It could be peripheral to a gaming device. The patent includes an illustration for the patent application which clearly shows an Xbox and a Kinect controller.

The patent application does not necessarily mean that Microsoft’s VR floor mat will see the light of the day. A lot of patents don’t necessarily translate into real consumer products. Variety also suggests that Microsoft may simply have included the gaming console as an attempt “to cover all of its bases” and prevent others from filing a competing patent for the same use-case.

Microsoft showed an interest in bringing virtual reality to Xbox a few years ago but it has since balked at the prospect in the recent years. Microsoft executives have confirmed to media that the company has no plans of introducing virtual reality to the Xbox One. Neither was VR mentioned during the preview of Microsoft’s next-generation Xbox at the E3.

However, the mention of the Xbox gaming console in the latest patent application may revive some hope in Xbox fans who still wish to have VR integrated into the gaming experience. Most important, the patent application means that virtual reality gamers may in the future look forward to a safer play space.

https://virtualrealitytimes.com/2019/10/05/microsoft-files-patent-for-a-vibrating-virtual-reality-floor-mat/https://virtualrealitytimes.com/wp-content/uploads/2019/10/Microsoft-VR-Floor-Mat-Patent-Application-600x306.pnghttps://virtualrealitytimes.com/wp-content/uploads/2019/10/Microsoft-VR-Floor-Mat-Patent-Application-150x90.png2019-10-05T17:16:48+00:00Sam OchanjiInventionsMicrosoft has filed a patent for a dedicated vibrating virtual reality floor mat that could help headset wearers avoid obstacles such as furniture in the room. The patent application also suggests that Microsoft is still committed to bringing virtual reality to the Xbox ecosystem after the tech giant reneged...Sam OchanjiSam Ochanjisochanji@yahoo.comAdministratorVirtual Reality Times