Mojo Vision has begun in-eye tests for its smart contact lenses and the testing was done by none other than the company’s CEO Drew Perkins.

According to a CNET report, the company’s CEO wore a functioning smart contact lens in his eye and even used the device for about an hour.

When the company first floated the idea of a smart contact lens, it sounded like something straight out of a futuristic science fiction film. But here we are, in 2022, and the company is doing a demo of its high-tech device.

Developing smart contact lenses entails packing in all the computing hardware needed to generate visual augmentations inside a tiny lens that you insert inside your eye. It is a tough ask but the company is walking the talk and already has a prototype.

Mojo Vision has been working on the smart contact lens for several years and they have now reached a stage of development where the contact lenses can be worn in the eye internally and be tested although Perkins referred to the experience of using them as akin to a “baby learning to walk.”

Perkins tested various Mojo Lens app demos with the contact lenses including reading text from a teleprompter app that displayed tiny text that floated on a display in front of the eye and using his eye gaze to scroll the text while still being able to see the people who were around him. The team doing the tests didn’t reveal the text displayed to him but he was able to read it.

He also used the smart contacts to look at an image of Einstein rendered in a green monochrome and said the rendition “looked great.”

The Mojo boss also did a demo of a lens compass app with a built-in magnetometer that displays compass readouts in real-time. Wearing his smart contact lens, Perkins was able to spin the compass around 360 degrees by rotating his head and seeing it go through different cardinal points.

The Mojo Vision smart contact lens needs a neck-worn processor that relays information to the lens wirelessly and sends it back to computers tracking the eye movement data for research purposes. The current setup needs a special cap with a built-in antenna. Perkins wore the cap to provide smooth connections for the lens’ early tests.

The Mojo smart contact lenses feature a tiny MicroOLED display onboard along with a tiny ARM processor, short-range custom wireless radio, and motion tracking by an accelerometer, gyroscope, and magnetometer.

The Mojo contact lenses feature eye-controlled head-up displays which seem to float in the air and provide an experience approaching that of a monochromatic Google Glass-like interface without the glasses.

At the moment, Mojo is only performing tests with a single lens in one eye. The company is aiming to have two lenses worn on the two eyes at the same time to create 3D visual overlays.

However, the latest milestone gives the company a testing platform that will enable it to build and refine the Mojo Lens and which will eventually reach a stage where the lens is submitted to FDA for market approval, Perkins added. The company says it will perform several further clinical studies, test the capabilities of the device and deliver feedback on software and apps.

Mojo Vision is aiming to begin testing the smart contact lens beyond its executives by the end of the year. Those future tests will involve partners like those that wish to explore health and fitness training use-cases, journalists, and investors. However, even Perkins admitted a certain nervousness about inserting a lens packed with processors in his eye.

Apart from the tests and clinical studies, the company is also aiming to optimize the device in order to make it more comfortable to wear. Optimization will also be done to improve power consumption, eye tracking, and other features and functionalities. Mojo Vision also needs to work on the application layer of the device that will enable users wearing it to do meaningful things.

Perkins notes that the Mojo smart contact lenses are still in a very early stage of development and are in a prototype phase so those hoping for a sci-fi-style lens in the near future can hold their horses for now. Perkins states that the smart contact lenses have just attained a first-step wearable form. The next phase that will involve refining the lenses further will take time and it’s not clear how long it will take the company to realize its objectives. 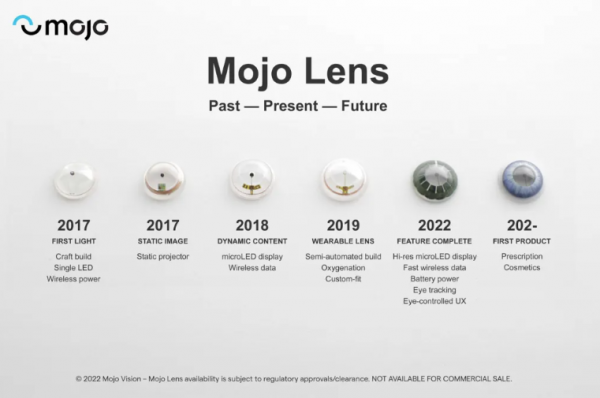 https://virtualrealitytimes.com/2022/07/03/mojo-vision-tests-its-smart-contact-lenses-in-eye/https://virtualrealitytimes.com/wp-content/uploads/2022/07/Mojo-Smart-Contact-Lens-600x336.pnghttps://virtualrealitytimes.com/wp-content/uploads/2022/07/Mojo-Smart-Contact-Lens-150x90.png2022-07-03T09:20:55+00:00Kristin HummelAugmented RealityHardwareTechnologyMojo Vision has begun in-eye tests for its smart contact lenses and the testing was done by none other than the company’s CEO Drew Perkins. According to a CNET report, the company’s CEO wore a functioning smart contact lens in his eye and even used the device for about an...Kristin HummelKristin Hummelkristiehummel@yahoo.comAuthorVirtual Reality Times