Home » Computing » Technology » You are reading »

NVIDIA and Stanford University have presented a research paper on ultra-slim VR glasses capable of supporting 3D holographic images. A prototype of the holographic glasses has a depth of only 2.5mm.

NVIDIA calls the Holographic Glasses and describes them as a near-eye display system that features an eyeglasses-like form factor for virtual reality. NVIDIA’s holographic glasses feature a pupil-replicating waveguide along with a spatial light modulator as well as a geometric phase lens for creating holographic images within a lightweight and ultra-thin form factor. 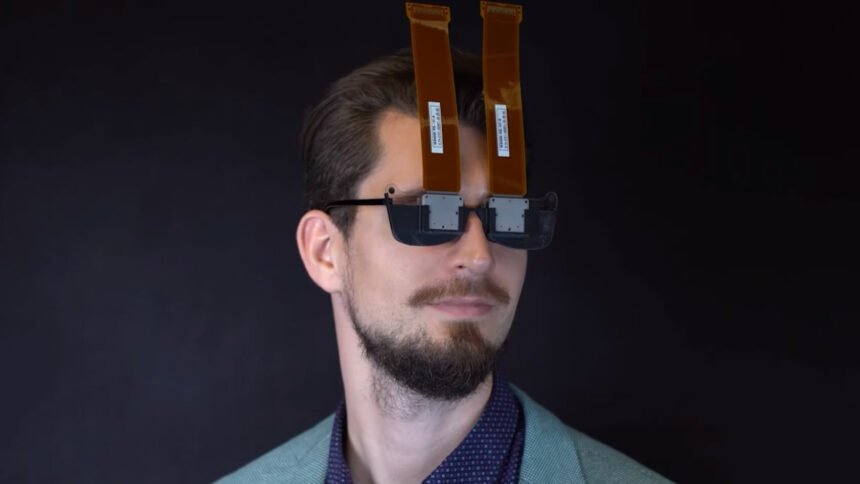 The proposed design of NVIDIA’s Holographic Glasses can drive full-color holographic images via an optical stack with a 2.5mm thickness. NVIDIA also presented a novel Pupil-high-order gradient descent algorithm that delivers the correct phase calculation to correspond with the varying pupil size of the user.

The NVIDIA innovation might be the answer to the clunky virtual reality headsets that are in use today. The aspiration of most VR headset manufacturers is to create devices that have the slim form factor of ordinary sunglasses to make the glasses less creepy and more socially acceptable if they are to be used in our day-to-day lives like smartphones.

NVIDIA and Stanford’s Holographic Glasses are a step closer to that vision. The prototypes were presented in the run-up to the SIGGRAPH 2022 conference.

From neural rendering to holography, NVIDIA will be sharing a record 16 research papers on advancements in graphics this year at @siggraph. Get a sneak peek in our blog.#SIGGRAPH2022 https://t.co/2ORBAzvwV4

The holographic display system has a depth of just 2.5mm, one of the thinnest if not the thinnest example that we have seen so far. However, the glasses still lack some of the electronic components that are required for a full-fledged virtual reality headset.

Apart from the flat images, it is also possible to realize a spatial holographic display with different focal planes. This reduces the straining of the eye in the virtual reality environment by avoiding the vergence-accommodation conflict.

Unlike the conventional virtual reality headsets that we have gotten used to in the past few years, NVIDIA’s prototype does not have a large distance between the lens and the screen. Instead, the two lenses have been integrated directly into the ultra-thin display system. The image is formed between the lens and the screen via a waveguide and spatial light modulator.

However, this prototype still has some disadvantages. For instance, it has a very small field of view of just 22.8 degrees. For comparison, the Meta Quest 2 headset has a field of view (FOV) of about 95 degrees. It also features a very small eyebox (the visible section of the rendered image) of just 2.3mm (static) and 8mm (dynamic). The glasses weigh just 60 grams (excluding the driving board) and also support 3D focus cues.

Ideally, both the FOV and the eyebox should be larger. Larger eyebox will give the headset lower throughput efficiency which also affects the demand for waveguide and the light source. The larger the eyebox, the more compatible the VR headset will be with different head sizes, and form factors while still providing a good image. The size of the spatial light modulator, however, has a direct bearing on the field of view.

The research authors say that some of the technical problems with their Holographic Glasses prototype can be minimized as soon as better optimized components become available in the market.

A field of vision of about 12- degrees per eye, for instance, will require halving the focal length. This could be realized by stacking up two of the new “Geometric Phase Lenses” (GP Lenses) on top of one another in the display system. One of these GP lenses is always added in the current prototypes.

The eyebox of the NVIDIA prototype, currently at 2.3mm, should be increased to at least 8.0mm (still narrow) with additional eye-tracking. The eye-tracking system could, subsequently, change the angle at which light enters the eye  so that it reaches the pupil correctly in all eye positions.

The report delves into fine detail on some of the current essential fine-tuning of the disparate components and parameters. To further enhance the image quality, the authors are also experimenting with alternative rendering algorithms.

The research authors are hoping that their design along with the experimental prototypes will stimulate further research into ultra-slim virtual reality headsets that are suited for day-to-day use.

In 2020, Meta showcased ultra-thin VR devices in the format of sunglasses which at 9.0mm, were still a bit thick and didn’t have any holographic display installed in them and thus, didn’t get rid of the vergence-accommodation conflict. Meta is currently undertaking specific research on multifocal VR devices such as in the Half-Dome 3 varifocal type.

https://virtualrealitytimes.com/2022/05/07/nvidia-is-researching-ultra-thin-displays-for-ultra-slim-holographic-vr-glasses/https://virtualrealitytimes.com/wp-content/uploads/2022/05/NVIDIA-and-Stanford-Holographic-VR-Headset-Display-600x338.jpghttps://virtualrealitytimes.com/wp-content/uploads/2022/05/NVIDIA-and-Stanford-Holographic-VR-Headset-Display-150x90.jpg2022-05-07T12:49:49+00:00Sam OchanjiComputingTechnologyNVIDIA and Stanford University have presented a research paper on ultra-slim VR glasses capable of supporting 3D holographic images. A prototype of the holographic glasses has a depth of only 2.5mm. NVIDIA calls the Holographic Glasses and describes them as a near-eye display system that features an eyeglasses-like form factor...Sam OchanjiSam Ochanjisochanji@yahoo.comAdministratorVirtual Reality Times