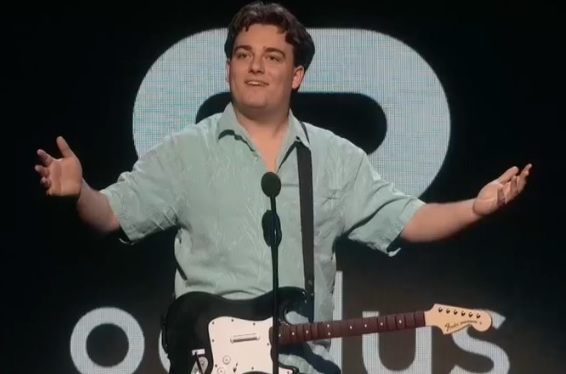 Oculus VR co-founder Palmer Luckey went up on stage at the Game Awards event in Los Angeles to announce Rock Band VR, a new virtual reality game created in collaboration with Harmonix. He said the game would likely debut by March of 2016.

Other than the news about Rock Band VR for the Rift, there are no other wording for how long Oculus Rift fans will still be waiting for the flagship, consumer-version Rift. There has been no news yet about how much will the consumer Rift cost, or even about its availability. The only thing we know so far is that it will cost about $1,500 — and that includes the price of the computer you’re going to need to run the VR experience.

Thanks to this new partnership made by Facebook-owned Oculus VR, Harmonix jumps into the likes of Sega and Ubisoft, who are all making specialized video game experiences for VR. Mark Zuckerberg, Facebook’s CEO, believes that virtual reality will change the way we use computers and revolutionize how we communicate with each other.

The Oculus Rift has been gaining huge interest over the past couple of months, as it nears its expected consumer launch earlier next year. This interest in the Rift has helped to spark speculations about the specific date on when the Rift will be launched – when Luckey shared on Twitter this week that he had a big announcement to share, tech industry publications began guessing he might finally share key information about the launch of the Rift.

The VR company has already tapped into the low-cost VR with the launch of the $99 Samsung Gear VR, an entry-level version of its technology that works with Samsung smartphones. It has also shown final designs for the Rift and discussed upcoming apps that will be available for it as well. Luckey has even demonstrated the Rift’s motion controller called Oculus Touch that translate hand gestures to the virtual world, effectively allowing users to interact with the computer worlds with the point of a finger.

Aside from this game launch announcement, there has been no news on the Rift’s pricing. The device is due to land on store shelves by March of 2016, but consumers still don’t know how much they’ll have to pay for it. The company also hasn’t said when eager customers will be able to pre-order the device.