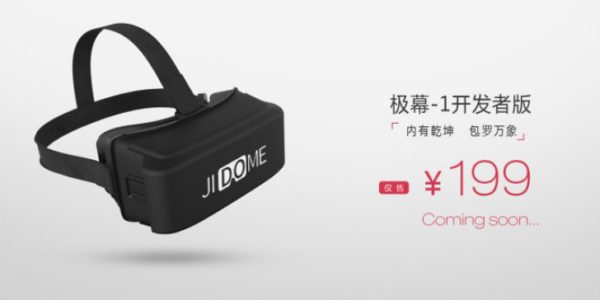 A new name on the VR headset scene has been gaining attention recently. Chinese virtual reality platform company FiresVR launched its JiDome-1 VR headset which functions similarly to the Samsung Gear VR. This is China’s first smartphone-based VR headset with a built-in tactile user interface. Previously the Chinese market had been flooded with similar products based on the Google Cardboard and modified versions of its open-source SDK, which were more like VR toys instead of the serious, high-performance VR headsets such as the Oculus Rift. It is also the first time that a Chinese company has attempted to provide a high-performance product comparable to Gear VR.

The JiDome-1 VR headset comes equipped with features such as an optical structure compatible to screen sizes of all mainstream smartphones, a high-precision 9-axis gyroscope and proximity sensor, redefined weak interaction buttons, and an air-cooling system with balanced cooling efficiency and working noise.

According to FiresVR founder and CEO Frank Lou, JiDome-1 is technically very close to the Gear VR. The key difference is that JiDome-1 is compatible with extensive Android phones with designated parameters. Soon, by tying up partnerships with well-known smartphone manufacturers, FiresVR sees a level kind of virtual reality experience to the Gear VR which currently enjoys a variety of VR experiences.

JiDome-1 has adopted an ATW algorithm similar to that of Gear VR, but to date not all Android phones support it. Compatible phones must have GPUs that support API of OPENGL ES3.0 or higher, with overall performance equivalent to or better than Qualcomm Adreno 310 (a GPU built into the Qualcomm 801 platform). This means that JiDome-1 is only adaptable to 30% of mobile phones currently on market, but the proportion is expected to exceed 50% in 2016, driven by natural iteration on the mobile phone market.

The said VR headset will be available to developers in the first quarter of 2016, priced at RMB199, or about $30 (in US Dollars). The consumer edition of JiDome-1 will be marketed in the second quarter, but FiresVR has not yet released details on its pricing.