What does VR art really look and feel like? Most of us have probably experienced virtual reality media streaming and “perceptible” VR applications and we might have a rough idea of how we can experience art in the virtual reality space. But even an avid VR buff will be shocked by the mind-blowing experience of fusing traditional artistic expression with virtual reality. Abstract meets abstract and whisks you away out of the realms of reality.

Update: The Galactic Gallery is an interactive Virtual Reality Art Gallery which recently won an HTC Viveport Developer Award in the Arts and Culture category.

This is the experience you get at the Galactic Gallery, a virtual reality art gallery headlining some of the world’s leading “visionary” artists such as Amanda Sage, Hans Haveron, Android Jones, Raul Casillas, Havi and Mugwort among others. Imagine abstract art that is fused with visual effects where the user is able to interact with the elements of the art in an immersive VR experience. It transports the user into the depths of the unknown as you try to explore and make sense of the art.

This being an immersive art experience, the visionary artists at the Galactic Gallery are able to apply not only the kind of immersive VR treatments that are only realizable in VR space, but they have also added some world instruments and sounds to bring the art to life . The result is an art gallery that can only be viewed through the VR medium. You can experience the Galactic Gallery using VR headphones, SUBPAC and the HTC Vive VR platform.

What is a Galactic Gallery art experience like? Imagine a journey into the cosmos where you can experience and interact with some of the most complex visionary art in the universe. The user floats in the cosmos or Galactic space and the art canvasses headlining top visionary art fly upwards in your immersive experience. Other elements and trees also enter the virtual art canvas and soon, you find yourself surrounded by large panels that host various kinds of visionary artwork which you can interact with!

Have you ever been to an art gallery and felt so captivated by a piece of art that you wanted to have more than just a visual experience and be part of the painting itself? In the traditional art gallery, it is just something illusory as you take in the painting from the depth of your imagination. In the Galactic Gallery, it’s real and you have the opportunity to be part of the art itself. You are not just an outsider staring at art on a wall; you are part of the canvas itself. Inside the art and the elements, interacting with them and watching them move and fly away. All the artistic elements suddenly become real and are no longer inanimate objects on a canvas.

Traditional art is generally the singular product of some mad genius but visionary art is a lot more complex. It’s more of a multi-pronged effort that aggregates the talents of many contributors. In the case of Galactic Gallery, the visual experience is created by marrying artistic talents, conceptual design, visual design, special effects and sound engineering that will fuse a battery of sounds to create the desired sound effect for the visionary experience. 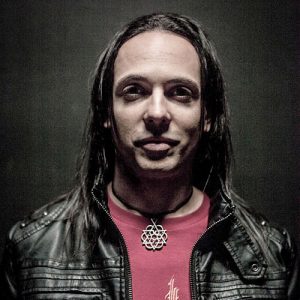 The constellation of artists and creators in the Galactic Gallery includes producer and instrumentalist David Starfire who is famous for his electronic-world-fusion music genre. David mixes an array of world instruments and fuses these sounds with modern beats to create his signature sound. David has performed alongside some of the biggest musicians in the world in some of the most iconic places such as the Pyramids of Giza and the Coliseum. Some of the leading global companies that he has worked with include Virgin, Google and Samsung.

In the Galactic Gallery, David works as the Lead Sound and Co-Conceptual designer and partners with Zach Krausnick who is the Lead Visual and Technical Designer in the set. The marriage of these two talents has created a truly interactive experience in VR art. Zach Krausnick also has a colorful experience in the virtual reality world having worked with companies such as HTC, Urban Outfitters, Pepsi and Adidas in creating outstanding custom virtual reality experiences. Some of the VR performances that he has collaborated in include the projection mapping custom content done with various virtual reality components. In the Galactic Gallery, Zach bridges the gap between virtual reality and other traditional mediums to bring about this mind-blowing experience. This work has also been featured in Kaleidoscope VR and Lightning in a Bottle. 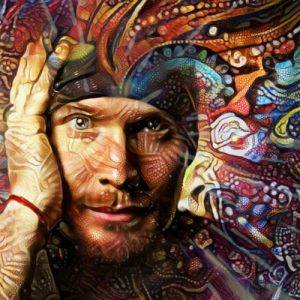 Other notable contributors in the enterprise include some of the globally renowned visionary artists such as Amanda Sage, Luke Brown, Chris Dyer, Mear One, Android James, Hans Haveron, Mars-1, Xavi, Mugwort and Raul Casilas all of whom David has had the pleasure of working with in the past. After brainstorming the concept with Zach, David reached out to these stellar visionary artists and so began the Galactic Gallery journey.

The process of creating visionary art began with more familiar pieces of art such as a piece of painting or an abstract sculpture. To create a more engaging experience, special effects are applied to make the piece of art more engaging and suited for an immersive virtual reality.

In the Galactic Gallery, the visionary artists have added a lot of realistic aspects to animate the experience as much as possible. For example, you can hover a candle in the cosmos in the virtuality space in order to illuminate the various art pieces. You can even grab elements of the art on the canvas and modify them to your preference. This is part of the “interactive experience” in VR art consumption. The visionary artists have gone out of the way to include imaginative interactive events that help distort the experience and give you an otherworldly experience. As you move about the “cosmos” in the Galactic Gallery, you can see the world beginning to take shape around you.

The magic is not just in the special effects but the interactive aspect. Virtual reality allows you to closely interact with the art in real time in a way that is completely impossible with physical art or traditional art mediums. It is this interactive experience that overdoes it. You can even immerse your head into the canvas and view the art from different angles.

While the technology is still relatively new, it is already unlocking hair-raising experiences for those that have had the opportunity to sample VR art through the Galactic Gallery. It distorts your reality and creates a new one that’s totally out of this world. It’s not something that our mind is used to. It creates a completely new way of experiencing and appreciating art and objects. We can only imagine the kind of ethereal virtual reality art that visionary artists will be creating in the future as they technology gets better and we get the capability to build a fully immersive artistic experience. It is almost impossible to imagine the depths that some artists will go into to distort our reality. We can only wait and experience what they conjure from the dark realms of their minds with a little help from futuristic VR technology.

The Galactic Gallery is also pioneering new locations and audiences for art consumption in the era of virtual reality. No longer is artistic experience confined to a few museums and galleries. The new playground for visionary art is now festivals. In a way, it is taking the mind-blowing artistic experience back to the masses and away from the distinctive and stately museums and galleries that are often seen as a preserve of the higher social groups. Virtual reality art “galleries” such as Galactic Gallery may just help in democratizing art experience.