Everybody’s Golf VR Tees Off on PSVR from 21 May

The advent of virtual reality and augmented reality has brought with it the promise of highly realistic video games that closely mimic the actual movement of sports. Sports games on virtual reality provide a whole new spectrum of possibilities. As the hardware technology gets better by the day, it becomes possible to have detailed and realistic controls that will largely transport the outdoor game to the indoors with all the detail and nuances as to make it feel as realistic as possible. Everybody’s Golf VR is one such video game.

Everybody’s Golf VR for PlayStation VR is a great virtual reality golfing game that anybody can play and a perfect go-to unwinding game for any gaming enthusiast. Anybody with the PlayStation VR headset can tee off a round of golf with relative ease.

To play the game, put on the PSVR headset and hold the PlayStation Move controller in one hand. The single Move controller is held downward in order to a mimic a golf club. A virtual assistant will tell you how you should approach the ball and get yourself ready for the swing. The virtual assistant will also tell you how much power you should put into the motion during the swing.

You can take a few swings to get a feel of the amount of force that you will need to put into the golf club. The VR golf game tracks the speed of the swing, thereby tracking the amount of force using a horizontal bar that is labeled from 0% to 100%. The game will avail the right club, turn you to face the right direction and then places a flag icon on the horizontal bar that indicates the right amount of force that will be required. At the start of the hole, you are likely to require a full 100% of force. As you get closer to the green, the force goes down and you may need 83% or even less.

Everybody’s Golf VR also has a grid that helps the player to line up the putts. You can give the Move a good swing in order to hit the ball. Take a few practice swings and see the horizontal bar fill up towards your target percentage. If you are too high, the color of the afterimage of the club head will be red but it will show blue in case you are low enough to hit the golf ball. To abandon the Practice mode in the game, press the center button on the Move controller.

Take a good swing with the Move controller and the ball will fly off into the air. You won’t be able to see the ball as it flies into the distance so after the hit, you can simply watch the number of yards as it is counting upwards towards your goal. Repeat this until you can take a good swing. There are times when you will miss the swings, even in instances when you should have been able to hit the ball. Without adequate velocity, the game will not register the swings as a hit. However, those “missed” swings won’t be counted against your score for the hole.

The swing detection is quite fussy and this can complicate things as you get closer to the green. You will have a few putts where you will need to get a 2% bar to get to the hole. You can subsequently do a few swings of the club with slightly exaggerated force to register the swing. Instances of the swings failing may be down to the tolerance of the game or the tracking of the VR headset but with some effort, you will get the ball into the hole.

When it comes to a put, you can hold your arm with the Move controller down. The software will show you a grid on top of the green. The game’s virtual assistant can tell you where the ground broke or where the ball is likely to curve after you have hit it on the incline.

The game emphasizes the more realistic control with moderate assistance that helps in simplifying the movements of the golf and this is in full display at the green. The hole has a visible vortex that sucks in the ball but you can turn off the vortex if you want to have a more realistic putting game. You will notice the simple grid overlay on the green that will show geometry of the green as well as any dips or slopes up. However the grid lines are spaced so widely apart that it is not always going to be helpful.

The demo of the game only has two holes. You can play on the Forest level with its lush trees and cherry blossoms visible from the distance. This is the first of the 18-hole courses that are planned in the gameplay. The second one is the Seaside and there is a third one that is yet to be revealed.

Everybody’s Golf VR has impeccable graphics which are both simple and sharp. While there aren’t too many objects or geometry, there is very detailed textures that will deeply immerse you in enough greenery along with intricate grass, leaves and lush trees. You can choose from many caddies including a female one that will stand there and offer you advice on the fairway or the putting green. However, the female caddy is mostly on location for the graphical realism on top of the already realistic landscape in the virtual reality game. 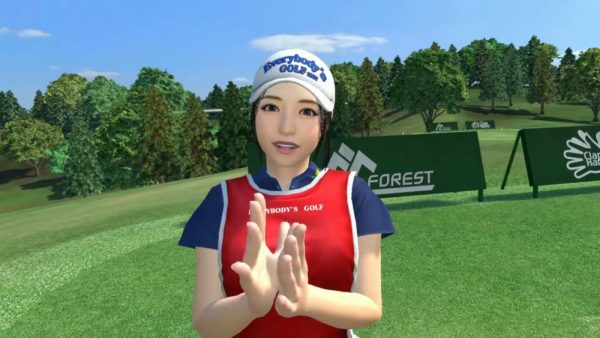 The developer is yet to reveal the leaderboard/highscore functionality or the online multiplayer options that may be available when the game is finally released although the company has stated that the game won’t have a local multiplayer option. Everybody’s Golf VR players will have to actually swing the clubs on their own and this will be accompanied with all the graphical overlays.

This VR version doesn’t come close to the Wii Golf version with its bold art and feel. The simulation is also not as detailed. Instead, Everybody’s Golf VR provides a very simple and enjoyable virtual reality golf game where players can test their swings just hard enough. If you are lay fan of Golf videos, you will definitely enjoy this.