The First AR Audio Apps for the Bose Frames Sunglasses

Augmented reality (AR) holds great promise for the future. Its potential to keep us engaged with one another and the world around us in a conveniently hands-free and heads-up manner is limitless and increasingly, many top tech and enterprise brands are recognizing this potential and seizing the moment.

Of the many AR-inspired innovations that are rolling out of the R&D labs and the assembly lines, one of the most intriguing has been the augmented reality audio innovation that allows users to augment their world with audio rather than through a visual experience. This audio-first approach to the implementation of augmented reality is best represented by Bose AR and its one-of-a-kind Bose Frames augmented reality sunglasses.

The Bose Frames AR glasses were released in the US one year ago and hit the UK market last week with rollout planned in other markets and already, there are lots of cool Bose AR-enhanced apps that you can use with the Frames sunglasses. Bose has also updated the toolset that developers can use to create more cool apps for its augmented reality audio glasses.

Here is an overview of some of the top Bose AR-enabled apps that you can try out with your Bose Frames sunglasses:-

Audiojack is an audio movie without words, video or music. The sounds in the movie have been edited together to tell the story. The movie is 100% sound design. While wearing your Bose AR-enabled sunglasses or even headphones, Audiojack will enable you to change the story in the movie using your head as the controller. It senses how you are physically reacting to the story and then creates a uniquely-tailored experience that will be unique every time you listen to it. You will never listen to a particular experience twice.

You can download Audiojack from the Apple App Store or Google Play.

City goers prefer to experience a new location by foot so they can take in the sights and sounds of the neighborhood and buildings as they walk. If you are in a new city, you will likely be holding your phone as you walk, trying to trace the directions. By using the NaviGuide AR as well as the Bose AR platform, a metropolitan explorer can keep their eyes off the screen of their phones and onto the spectacular sights of the city. The NaviGuide AR, developed by Navisens, helps you accomplish just that. The app leverages on your Bose AR-enabled sunglasses or headphones to help you understand the landmarks that you are looking at. If you standing next to a restaurant, the app will give you the information that you need to make decisions such as the Yelp! ratings and the number of reviews that the restaurant has received when you double-tap the device. The NaviGuide AR also includes various other points of interest that will help users to explore cities heads-up and hands-free.

Try out the NaviGuide live demo.

You can use the Golfshot app to play your best golf while wearing the Bose Frames augmented reality sunglasses. With the glasses, you can hear accurate GPS distance to the green as well as the hole information for over 45,000 golf courses around the world simply by tapping on the sides of your Bose Frames sunglasses. It’s a nice way to enjoy an AR golf game hands-free and heads-up.

Play your best golf with Golfshot. Get it on App Store or Google Play.

With the Komrad AR gaming app, you are immersed into an interactive adventure where the Cold War is still ongoing in the cyberspace. You can use your Bose AR-enabled sunglasses or headphones and carry out virtual missions in the real world using only your voice and gestures, hands-free and heads-up.

Play with the future on Komrad AR.

You can use Traverse FM to experience audio in a totally new way. The app makes use of the heading direction from your Bose AR-enabled device to create a physical audio listening experience. The Traverse app immerses the user into an audio listening experience that will transport them into other worlds, be it a mission on Mars as the InSight leader or a 1969 studio session with the rock and roll legend Elvis Presley. Listeners will feel like they are actually physically there even if they are only sitting in the comfort of their rooms.

Head Games was developed by Earplay exclusively for the Bose AR-enabled devices. It’s a feature-filled interactive audio adventure and sci-thriller in which players use gestures such as head-shaking, nodding, turning, ducking and their voices to determine how the story will pan out. The fate of the world in Head Games is hinged on your interactions with NASA agents and extraterrestrial life forms.

Enjoy a new kind of immersive storytelling with Ear Play.

Otocast will take you on an audio tour of various locations. Users can tap on their Bose Frames sunglasses or headphones to get more detail about the various points of interest in the world around them. The information is audio and is transmitted directly to your ears so you don’t have to constantly look at your phone screens thereby giving you a heads up and hands-free experience while exploring various interesting locations around the world. 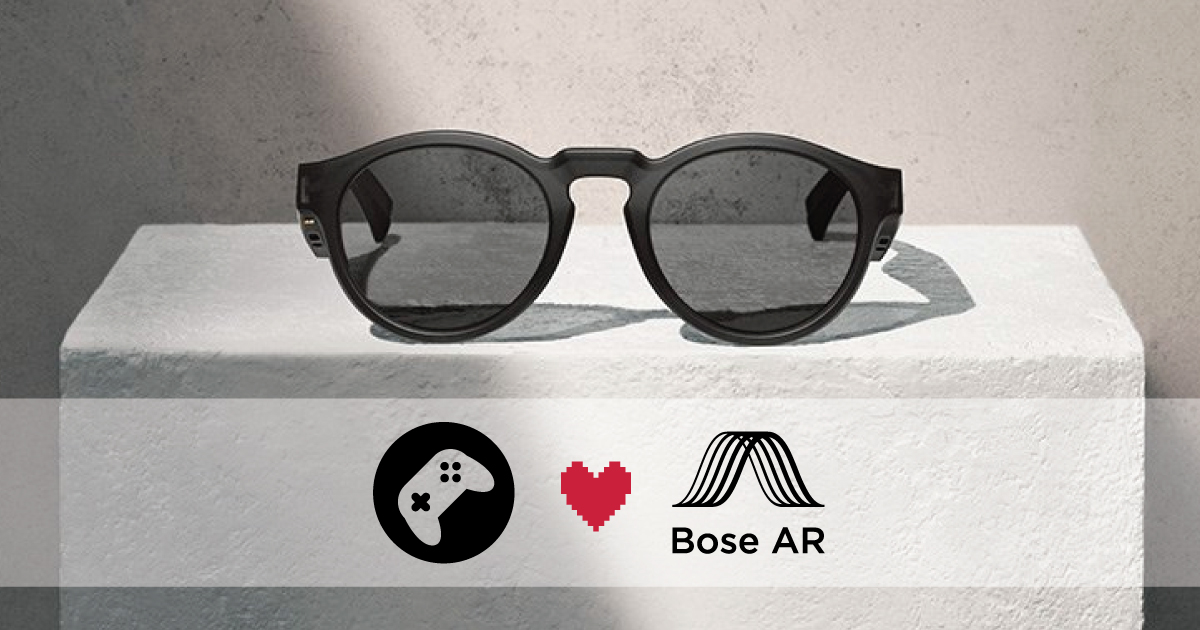 The Radar app will play various experiences produced by Bose AR creators. There are numerous types of content that you can try out with the radar app such as personal stories from the Hip Hop legend Darryl “DMC” McDaniels, Tim Heidecker and Dave Willis (of Aqua Teen Hunger Force and Squidbillies). You can also listen to a repertoire of 3D immersive audio from both current and upcoming artists.

Check out Radar by Bose.

The Bose AR-enabled apps provide us with our first look into the promise of heads up and hands-free experiences realizable with audio augmented reality. Users can find these and any new additions from the Bose Connect app.

The Bose AR technology has been incorporated into the Bose Frames audio augmented reality device with its groundbreaking open-ear form factor that still delivers a great audio performance. The sensors in the frames sunglasses will help you manipulate the apps from gestures such as head movements, thereby creating a new level of interaction and control.

The platform now has the Bose AR Native SDK (in beta) along with Unity SDK (also in beta) that Android developers can leverage. Additionally, there are also iPhone versions of these software development kits to support app development for iOS devices. Both development kits are updated on a regular basis to meet the needs of developers.

Bose is also previewing its Bose AR Creator Tool which is the first audio AR visual programming tool. The tool enables both creators and artists to create elaborated augmented reality experiences without the need to write code. Users can upload content or script interactivity onto the platform through an intuitive visual interface. It supports both spatial audio and interactive audio.  Check out developer.bose.com to access both the creator and developer tools.

https://virtualrealitytimes.com/2019/05/21/the-first-ar-audio-apps-for-the-bose-frames-sunglasses/https://virtualrealitytimes.com/wp-content/uploads/2019/05/Screenshot_2019-05-20-Home-Golfshot-600x299.pnghttps://virtualrealitytimes.com/wp-content/uploads/2019/05/Screenshot_2019-05-20-Home-Golfshot-150x90.png2019-05-21T09:25:04+00:00Sam OchanjiAugmented RealityTechnologyAugmented reality (AR) holds great promise for the future. Its potential to keep us engaged with one another and the world around us in a conveniently hands-free and heads-up manner is limitless and increasingly, many top tech and enterprise brands are recognizing this potential and seizing the moment. Of the...Sam OchanjiSam Ochanjisochanji@yahoo.comAdministratorVirtual Reality Times